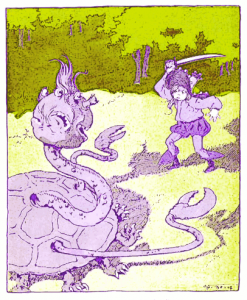 Here’s a challenge — come with as many sentences as possible which describes some poor soul being maimed by a weapon. Even with the aid of the mighty thesaurus, and plenty of time, you may have difficulty coming up with enough prose to last a single encounter.

Almost virtually every game has some form of “Hit Points” to keep track of each combatant’s state of health. However, it is not always necessary to describe a loss of hit points as a direct hit.

In Dungeons and Dragons, Hit Points is an abstract concept which includes the PC’s health, luck and ability to reduce the impact of blows and wounds. Hence, when Hit Points is lost, it doesn’t necessary means that the PC is wounded. Rather, it can also be meant that the PC’s ability to avoid fatal wound is reduced. Hence, a loss of Hit Points could be described in a variety of ways, such as:

Remember that those are just descriptive ways to describe a loss in Hit Points, not literal rulings. This may be problematic if your combat in your games are run like a mini war-games, with great attention paid to the details of the rules. After all, a cleric casting Cure Wounds is not going to help a fighter whose loss in hit points are described as “his attempts at evading the fireball has put him into a disadvantageous situation”, if Cure Wounds can only cure wounds.

A miss in combat is often boring. No one get hits, no damage dice is rolled, and no die in a moment of spluttering blood and gore. As it is unlikely that everyone hits all the time, there will be plenty of misses and fumbles, and you may as well make the best of them.

Try to think of how a miss could be livened up. The warrior’s two-handed sword, instead of cleaving into the flesh of his opponent, may split a boulder into twain, or chop a table into half. The magical bolt of power which misses its target narrowly may collides into a wall, exploding into a firestorm of sparkling lights and flame. Arrows can get stuck into trees and morning stars can smash into walls. You can also dramatize near-hit by having the weapon slicing off some of the opponent’s hair or slashing a small section of the opponent’s clothing.

Sometimes, the simple sentence could sound utterly impressive with the right voice and pacing. Let take “The goblin lurches at you with his sword” for example. If spoken calmly, or worse, with a monotonous voice, this could be downright yawn-inducing. But if spoken loud enough, with alacrity and enough energy, it is effective – it gets the point across fast and it catches the PCs’ attention.

Varying between short and long descriptions and different speaking voice creates a sense of variety and can help to keep the combat encounter interesting.

Why must it always be the GM’s fault when combat descriptions get dry and boring? Or put it another way, does always have to be the GM’s onerous to provide an interesting, lively and dramatic commentary of the combat sequence? Shall not the players contribute somewhat too? This is the idea of this tip.

From time to time, give players “Moment of Glory”. I would tell the player something akin to, “You manage to disarm your opponent’s weapon, hurling it far away to one side. It’s your moment of glory” and the delighted player will go on with a dramatic description of how he manages to disarm the weapon and how stylish the weapon flies through the air, and etc.

Of course, you shall choose with care when to give Moments of Glory, and whom to give to. I usually give those Moments to critical hits, killing blows, exceptional success and the like.

Giving critical hits as Moments of Glory to players is obvious. What about critical failures, or fumbles? How about it giving it to another player and have him to describe the poor PC’s plight? The GM will announce the result of the fumble (“he breaks his sword, and the shards do 2 points of damage to himself”) and have another player to narrate the scene. Use this to get quieter players to speak up.

Moments of Glory can also be applied to other actions beside combat too. Experiment and find out what works.

Combats tend to be complicated and fraught with many rulings – what with initiative, AC, Basic Attack Bonuses, multiple attacks, attacks of opportunity and etc. Giving great combat descriptions are easier when you have the ruled tied down. Trying to get the rules right and thinking of powerful prose at the same time can be downright stressfully. You may be worrying about the rules too much to pay attention to what you are saying and what you are not saying.

I called this the “Running Commentary” technique and a prime example of it happens whenever you watch soccer on the television. Describe the combat sequences as an observer, and from time to time, have the observer do some wondering. So, instead of saying, “Alreic, make a to-hit roll”, try “Could Alreic strike the goblin with his long sword?” Players could take this as a cue to start rolling their dice.

Have the imaginary observer reacts to the PCs and the NPC’s’ actions. Cry out “Alas, alas!” when the Fighter fumbles a blow or, “That was a shaft well-shot!” when the Ranger manages to succeed in a well-placed called shot.

Whether to describe combat using a second-perceptive view (“You deal out a powerful strike, aiming at the goblin”) or a third-person view is extremely subjective, and hence up to your personal preferences. It is still possible to hold a running commentary using the second- person voice. Experiment and figure out what works for you.

If you have a problem coming up with descriptive combat sequences on your own, get it from the masters. Start reading up on novels which feature the type of combat sequence that you are looking for. However, don’t just read. Pick out the interesting phrases and sentence structures and play with them around in your mind. Write them on a piece of scrap paper and pin it on your GM screen. Put them in your notebook and refers to them in your free time.

Combat can be much more fun and interesting if everyone sticks to “dramatic speech” instead of game speech. After all, how exciting are “I attack the goblin” and “I use Power Attack on the enemy”? If the players want interesting combat sequences, they shall work for it too, won’t they?

Encourage PCs to dramatize their combat actions. If necessary, flick open a thesaurus and find all the synonyms for “attack” and prepare a list for the PCs. Ask them to think of cool, memorable quotes to say during combat. Even a cliché “For the King!” can promote some mood.

If the game sports special combat techniques (such as the “Power Attack” feat in D20), insists upon the players to “dress” them up differently. A “Power Attack” could be “I lift high my sword and chop it down with a vicious swing”. Even “I try to trip the goblin with my stave” sounds so much better than “I use Improved Trip on the goblin.”

Spells, likewise, shall also be lifted out from the typical “I cast a Magic Missile at the goblin”. Try having the wizard describe what happens when the spell is cast or provide some alternative names for the spells. Insist that the wizard comes up with new name for the spells or to personalize the spells to suit his character concept.

The action get stale quickly if all the combatants do is to hack and slash at each other. Set the fight in an interesting locale to spice things up, so that the combatants can do more just swing their weapon. The typical example is that of a tavern brawl. You get to throw mugs about, jump on the tabletops, swing from the chandlers and there is always the threat of the Town Watch turning up.

Remember, the more varied the actions of the combatants, the easier it is to come up with descriptions. Say you set the battle in a vast plain of grass with no obstacles in sight. All your PCs can do is to attack each other and your description is just about hacking and slashing. However, if the battlefield allows for more options, there’s less chance of you repeating the same descriptions over and over again.