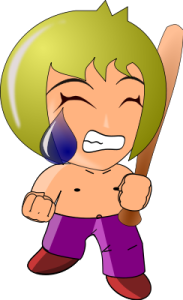 Roleplaying is a group activity. One cannot enjoy roleplaying alone. Sometimes the GM’s job is made more complicated by conflict that takes place within the group, when arguments and fighting takes place between characters and players.

Consider the following situation to get an idea of what I mean:

Having defeated the evil witch, the party searches her cave for loot. Sir Gawain the Paladin comes across the source of the witch’s power – her spellbook, written in blood on dried human skin. The party crowds around. Sir Gawain says, “We shall destroy this book, for it is evil, and should not fall into the wrong hands.”

Malfeus the mage says, “You’ll do no such thing. It could contain a good spell for me.”

Sir Gawain replies philosophically, “If we use the weapons of the enemy, we shall become corrupted by them.”

Malfeus replies, “Crap! Give it to me.”

Sir Gawain says, “Hold back, little mage, I keep it from you for your own good!”

Malfeus zaps Gawain with his wand, turning him into a pile of dust.

In this scenario, a conflict developed within the party. That in itself is not a bad thing. But the handling of this conflict was poor. As a result of this poor handling, one of two things will probably happen at the next session; either Gawain’s player won’t pitch up, or (worse), he arrives with a character that aims to get revenge on Malfeus.

Characters in roleplaying games are often too quick to resort to physical combat to resolve conflict. This is probably because opposition is generally overcome this way in most roleplaying games. In real life, where conflict develops between people, they do one of the following things:

These options do not appeal to roleplayers. For example, characters are not likely to leave a party because in doing that, they effectively leave the game. The player would need to create a new character. Players subconsciously would prefer that it was the other guy’s character that left the party. To many people, having a character “quit the game” is the same as admitting fault or accepting defeat. To many players, the only way to “win” the conflict is to force the other guy to be the one to start a new character (i.e. to kill him).

Why Conflict Can Be Bad

Why Conflict Can Be Good

Do you have conflict in your gaming group at the moment? Try to identify the root cause from the four listed below. This will help in easing the conflict.

One character has something that the other wants. This could be something physical (e.g. a magical item or money), or even something theoretical (e.g. experience points, fame).

This root cause relies on greed or a desire to be the best. It is the most common cause of conflict in any roleplaying group. Many players are prepared to enter conflict with their fellow players just to ensure that their character is the one with the best magical equipment.

PCs are divided into factions, or have political responsibilities outside of the party. Many game worlds are designed this way deliberately in order to encourage positive conflict within the party. For example, Vampire the Masquerade, Legend of the Five Rings, and many other game worlds encourage the PCs to support an organisation outside of the party – and sometimes those priorities conflict with the priorities of the other PCs. Some example personality conflicts between characters:

These personality conflicts can be fun! But they can also be lethal to your game!

Jim thinks that Mark is a dweeb. Therefore Jim’s character does not get along with Mark’s character.

Some Solutions for the GM

Try to be aware of this problem early.

Assuming you want to prevent conflict from escalating, consider these solutions:

For Personality Conflict Between Characters