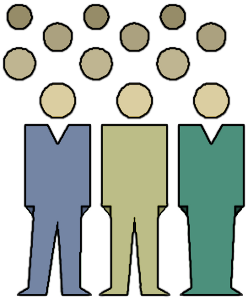 Below is some advice that ALL GMs can use, though “workaholic” GMs should especially benefit from the contents of this article.

The problems the below listed tips are meant to solve often occur for GMs who are not as good at coordinating people as they are at writing and running adventures. Don’t be afraid to put your foot down! You are the glue that holds the group together. Give those hangers-on a sense of responsibility and watch their performance skyrocket.

Being a GM can be a lot of work. When the game is in session and you are doing all of the work and having none of the fun, try delegating some simple tasks. This will prevent burn out and improve the game for everyone involved. Whenever I GM a group, especially one composed of less experienced or unfamiliar players, I always make sure to delegate tasks to the players.

When GMing a group try to have: one player taking notes; one sketching player copies of maps (where appropriate); another keeping track of participation in encounters and a running tally of experience points and treasures earned (usually players will do this without asking); and also one keeping track of frequently changing information or combat stats, such as initiative, hp, and unusual status. I’ll even make sure to tell them when something is important for them to record, although of course, I am careful not to give away anything that should be kept secret.

In addition to getting their personal character sheets, I ask all players to keep me supplied with updated summaries of their PCs. These summaries should contain any information either I or they feel is necessary for the GM: i.e. spells, AC, attack bonus, skill modifiers, commonly used weapons, obscure or confusing character specific rules, etc. If these summaries are to be useful, they should be as brief, and yet also as complete as possible.

If a player wants to make any significant changes to their summary, they must be made either between or before (or maybe just after, time permitting) game sessions. These changes must be given suitable justification and the GM, as well as the other players, must also be made fully aware of them. Any changes which involve something that is either new or complicated must be sufficiently explained to everyone in the group. Anything not conforming to the above prerequisites can be disallowed at the GM’s discretion.

When an NPC joins the group as a fellow adventurer, one player should be put in charge of said NPC. This player will be responsible for the NPC?s character sheet as well as for any changes to the sheet that take place over the course of adventuring. The GM, however, will still run the NPC as usual and, obviously, keep any pertinent information or secrets to himself. The upside of this is: instead of doing the bookkeeping and note taking for one NPC who will constantly be involved in the action, the GM can instead focus on the NPC’s that require more of his attention.

All of the above will drastically cut down on interruptions during the game, and also improve the suspense of disbelief.

Another time saver is to have the entire group, not just the GM, be responsible for looking up rules. This ensures that the flow of the game can continue uninterrupted. Keeping this in mind, I always try to preempt rules queries by having a player look something up as soon as it appears it may become relevant, not after we have come to a sticking point. It is very important to make sure that the players in question will know the right answers from the wrong ones! If they don’t, it defeats almost the entire point of this task. Putting players into groups with specific roles can often make this process more accurate and efficient. Have one group be in charge of the core rules, another in charge of supplemental materials, etc. Feel free to use any other setups that better suits your game.

Being a GM can be a lot of work, so don’t take on jobs that aren’t even yours to begin with. Always let the players help out. It keeps everyone involved during all parts of the session (no more dice stacking), and it can free up time. Time to do the things that really matter. Things like designing adventures, creating believable NPC’s, and running smooth combat encounters. Those are the things that make a good GM, not bookkeeping and pencil pushing. So remember, when everyone is involved in every part of the game, every part of the game becomes fun for everyone, including the GM.