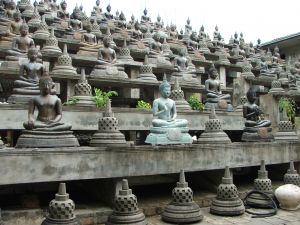 Here are ten takes on unusual approaches to the divine for your campaigns and worlds.

This world started like many others, along with a pantheon of native gods, but a cataclysmic event changed all that. An alien pantheon of gods, from worlds and realities unknown, usurped the gods of these people, imprisoning, banishing or even destroying them outright.

Confusion reigns below, but eventually the new gods make themselves known to the populace. Reactions vary. Some take to worshiping the newcomers. Some cling to their old, perhaps now non-existent gods. Those priests and certain mages that derive their powers from above will have little choice, though, if they wish to keep their flow of magic.

Perhaps a campaign built around the search for the old gods? Regardless, it would certainly make for a dynamic world.

This world is too small for the sheer power of all deities (or they just can’t abide each other). Therefore, gods take turns in exerting their influence; at other times they are unreachable. If you need support from high on, you have to pray to the gods who are present – but be careful of what you ask of whom…the gods you worship may become displeased with wrong associations.

Here, most people will have several from several pantheons. And whether a god’s influence revolves by season, year or some other mechanism, all people know it, and religion always involves a little politicking – the priests are the greatest masters of this art.

There is a name publicly known to designate the deity. However, for praying, people use the secret name of their god(s), a name they have chosen themselves, or learned from others (typically, it is passed on in a family). And they better protect it, because if others make use of the name, they can:

a) Call for favors for themselves – and gods don’t grant many of those!

It is customary to devise intricate rituals with hidden meanings to appear as a distinct enough supplicant to one’s god. In addition, the longer a name is used, the easier the contact becomes. (This works equally well with monotheism – one common god invoked by many names.)

Instead the people of this world looked below to reach enlightenment. The oceans of the realms function here, as the skies and heavens do in most orthodox worlds.

It is below the endless, raging deep, where the races believe the gods come from. The oceans are the great mystery, not the skies above, and the realm of the gods can be found in the great unknown below the surface, in some eerie benthic realm of cold and darkness. Many subtle and some profound nuances exist in this world, and in other ways it is not unlike other worlds with intricate, omnipresent pantheons.

People, even ordinary folk can call on the aid of gods – but the helping god will be paid on the spot, usually by draining the caller’s life force. (The form may vary by deity and purpose – sanity, anyone? Priests devoted to that god will seem to pay less.) You want a miracle, you get it.

Priests, in general, are those who can get away with more. But calling for any real favor will get the person hurt. Calling for big favors is the same as, “Save my tribe, oh lord, and take me as your willing sacrifice.”

6. They Will Save Us! (But Have Not Yet Been Born)

Gods do not exist… yet. But we know they are coming. And when they do come, they will know all our deeds and failings. Act properly, or our future saviors will not be pleased. Thus, everyone is preparing for the Great Divine Birth.

Just need to find out what the gods will be like.

7. Careful What You Pray For (And When!)

Everything here revolves around rituals. Worship here is not unlike worship in orthodox worlds with one major exception: prayer must be conducted at precisely the right moments, and only at those precise moments. Otherwise, dire consequences can ensue with prayers mis-answered and tragedies abounding. The priest class here is of vital importance and of highest standing. They are the Time-Keepers. They know exactly what can be prayed for and when! Usually, the priests will base their guidance according to a complicated astrological system, not unlike the infinitely complex Hindu astrology of our world.

Ancestor worship taken to an extreme. The dead are gods. And the only god is Death. Those who pass on become his demi-gods. The living are well aware of their reality and indeed worship countless generations of deceased relatives! No guard dogs necessary in these homes. Spirits are always afoot. In fact, one can’t escape their gods. There are more and more every passing generation. And they like to bicker, just like your real-life relatives. These ones, however, can also grant boons to their living kin, courtesy of the one god, Father Death.

Careful tracking of family trees in this world is a crucial facet of life. Honor thine old-folk! You will soon be praying to them.

God is in all things material, and therefore he sees whatever people do in the material world… and that is what matters, what you really do – materialism, taken to a divine extreme. There will be various economic systems tried, and differing religions and worldviews on how to manage your property.

Prayers are nice, but to approach a god you have to actually DO something. Gods do all the hard work (they run the universe after all), and mortals shouldn’t stay behind!

Some of the worshipers periodically rebuild and destroy their temples, again and again. Most create worthy offerings, and consecrate their products to their chosen patrons. No matter the approach, words alone never work.

From a moral point of view, the droves may keep on babbling, but it is the true substance, the real things, that count. It does not matter what you say, only what you do. That is, what differs good from evil. (Note: may have a special fate for the slackers.)

Gods are dangerous creatures, sometimes friendly, mostly not. Temples are the way to make contact with them if not easier, then at least concentrated in one place. Were it not for the temples, gods could be running amok among the people.

Therefore, mortals have to keep the gods close to temples, entertained and worshipped. It doesn’t make the worst of them any better, and there is no guarantee some won’t go on trips now and then. Still, there have to be priests who are hardy men, able to survive the rigors of their position, get a sufficient number of worshippers to make the gods feel important enough, and mediate the contact between mortals and immortals. They are the diplomats and defenders of mortals. The gods are miserable bastards, deal with it (and don’t say it out loud).