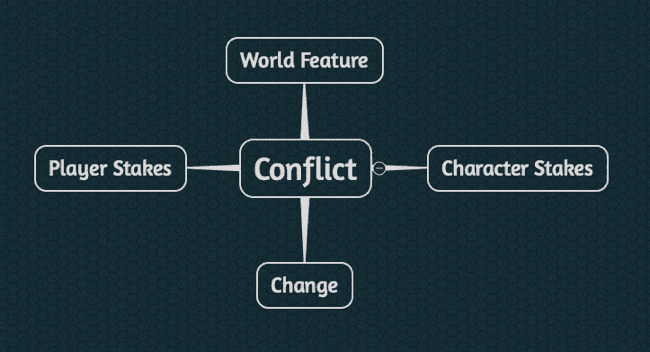 A tip for you today about making your world feel dynamic and amping up your stories at the same time.

This tip is inspired by page 25 of the excellent book, Kobold Guide to Plots and Campaigns.

Think of RPG Story as Player Stakes meet Conflict meets Character Stakes. We’ve covered this before in different ways, so I’ll be brief.

Your players want stuff and their characters have a problem. Those are the pair of Stake bookends of your plot.

They put their PCs in harm’s way for the bling.

Characters want to save their village, become head of the thieves’ guild, or whack the villain. “Let me survive this so I may save my family, please oh great gods.”

The Conflict you lay down is the villain doing bad things, for instance.

We can rewrite this as a simple Dramatic Question starting with the Conflict and ending with Stakes to guide our adventure designs:

Can the party defeat the demon high priestess and her cult to save their village and become wealthy local heroes?

Pick some cool aspect of your world you want to show off, playtest, or bring to the table for any reason.

Could be a kingdom you’ve just built, or an astrology system you’ve implemented, or a weird fen with terrifying creatures you’ve mapped out.

We drop a conflict in there. War, bandits, unholy ritual.

At the end of your adventure, have the players and their characters change the World Feature.

Could be they overthrow the tyrannical monarch, discover or restore an astrological house, or drain the fen.

In this way, the party changes the world.

Lots of advice out there to make your worlds dynamic.

“Add depth to your campaigns with world events.”

This is how you can do that with ease.

The trick is how your RPG Story meshes with your World Story:

The tutorial delves deeper into adventure design and how you can use the story structure I share in this article to improve your adventures.

Can the party defeat the demon high priestess and her cult in the fen to save their village and become wealthy local heroes?

Give the fen you just mapped out a lair for the priestess and her cult.

And in your encounters, add a way for the party to change the fen.

In Case of Failure, Break Glass

You could put them both into a magnificent grande finale. But that becomes a bit stale after a couple times, and worse, a bit passive.

By passive, I mean you often need to tie both conflicts to the same root cause and resolution. Fix one, you solve both.

But fertile grounds lies in decoupling those so you get two encounters.

This feeds into our desired story structure:

This gets you more gameplay with two encounters instead of one.

For example, the demon priestess opened a portal to a plane in Abyss, causing noxious water and terrible creatures to pour out. The fen grows daily, putting the party’s village in jeopardy.

If you structure your adventure so that whacking the priestess closes the portal at the same time, it’s a double victory. But that cuts your adventure’s potential a bit short.

Instead, the characters must whack the priestess by sending her back through the portal. This is an Achilles Heel villain, which you might prefer over a combat-kill resolution. Your call.

Once the demon’s gone, however, the party still needs to close the portal.

So vanquishing the priestess serves as rising action. Big drama here, but more action to go.

The party can close the portal with a counter ritual. Perhaps cultists return to their senses once the demon’s gone, and they can advise. But it’ll require bringing some of the demonic swamp creatures back and the crystal embedded in the cave floor.

Again, you can make both World and RPG story conflicts end in the same encounter. It does have a big fireworks effect.

But making them part of the same adventure as different stages offers a lot more gameplay and makes your adventure design easier.

Change the Players and Characters, Change the World

We now have a great way to make players feel awesome. They’ve changed the world!

And in so doing, they get their personal and character rewards.

You also got to show off a cool world feature you’ve design. Not only show off, but adventured in and thoroughly played and experienced.

It’s a very effective way to make your setting feel dynamic, and add more punch to your stories.