Ramping Up Tension In A Roleplay Plot - Roleplaying Tips
0

Ramping Up Tension In A Roleplay Plot

I am mid-pivot for a campaign. I thought the action would be in the wild. But it’s all happening in the civilized areas.

A simple change, right? Just do a search and replace to change each instance of attack to talk. Ha ha.

Here’s what I look for when I have roleplay plots:

This is easier said than done though, so let’s see how we can use these GM Toolbox techniques to give our roleplaying plots lots of juicy tension. 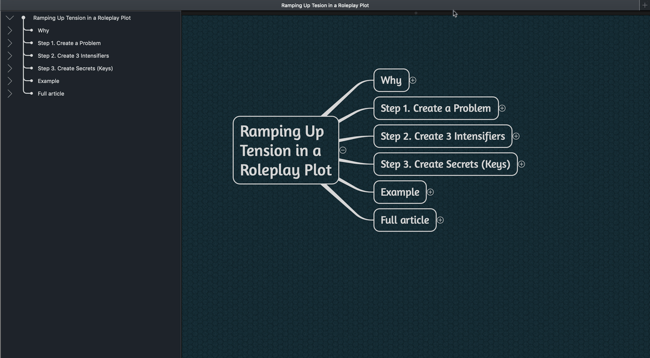 The video contains a detailed explanation and provides extra tips on how to craft great roleplay adventures.

When I make dungeons now, I don’t detail many rooms. I’m not a room-centric designer any more.

After building simple 5 Room Dungeon skeletons for key story areas, I leave the rest to other GM Toolbox tools, like Features, Impressions, and Discoveries.

I’ve shifted from thinking of dungeons as room-based to area- and environment-based. I picked up this tip from D&D 4E, which did a great job of presenting adventure sites as dynamic areas.

So too do I view roleplay plots.

I’m not going to spend time detailing encounters with each person the PCs could meet. Too many variables to worry about in a player-lead type game.

Instead, I let story structure give me a skeleton and then I just build important legos, such as NPCs.

I start this process off with a Problem.

But I need a Problem big enough to hold several encounters.

For example, The Keep is cursed. If the party knew what the curse was, how it was created, how to remove it, where to go, and what to do to remove it at start, I guess they could solve the plot in one encounter. Unlikely, though.

Instead, The Keep’s curse is a big enough Problem to support a full adventure.

Here are some examples of great Problems:

Dungeons let us wick away at party health and resources. Drama emerges all on its own as beleaguered heroes beard the villain in its lair.

With roleplay plots, no such economy exists. We must get drama from elsewhere.

We get rising action for plots by using Intensifiers that you layer onto the Problem.

If we make the Problem worse, the plot amps up.

If we just target NPCs and pre-set encounters this way, we’d only intensify that moment in gameplay. When the encounter ends, the tension dissipates.

But when we build intensity into the Problem, all encounters from that point on inherit the urgency, increased danger, or higher stakes.

We should also add three Intensifiers in strategic fashion.

Because we target the Problem instead of the PCs, NPCs, or specific encounters, the tension does not get resolved until the Problem gets resolved.

Let’s say the PCs’ home is cursed. That’s the Problem: remove the curse.

We figure on 15 core encounters in the form of three 5RDs to resolve the plot.

So we plan to introduce an Intensifier every five encounters. This is merely a guide to help us spot opportunities while GMing. If a great opportunity to trigger an Intensifier happens earlier or later, jump on it.

We’ve got this now:

If you have ideas already, write them in the Effects column.

Let’s return to the three Intensifier types I mentioned:

I roll a d3 and get Stakes, Danger, Danger.

Now I use the types to brainstorm ideas.

The characters live in The Keep. Ages ago The Keep was Cursed. All who live there do not age and they lose their long-term memories. Inhabitants forget they’re even cursed and think they lead normal lives.

After the party learns about the curse and begin questing for solutions, they learn their brief stay at The Keep has cursed them, too. If they can’t solve the curse, they’re doomed to forget everything important.

Talking with people puts them at the entrance to the secret dungeon below The Keep. The dungeon has ageless foes who will guard the magical source of the curse.

Just as the PCs discover the magical gem room, a being materializes with minions to defend the gem.

Because this is more of a roleplay adventure, plot advancement comes from:

This effectively becomes an encounter template.

When players decide who they want to talk to and why, whip up this Mad Lib and fill it out.

The cool thing is the players decide Information and NPCs. Leave all that up to them.

You’ve already figured out what the Problem is, so that’s done too!

That leaves one thing left to dynamically fill in as you GM: Key.

“Give everything a secret” comes from the excellent Dungeoncraft Dragon Magazine column by Ray Winninger.

A solution requires answers to Who, What, When, Where, and How:

Each ingredient becomes a Key to unlock the Problem.

A Key becomes unlocked when players learn a) the Key exists, b) what the Key is and does, c) how to acquire the Key.

Here’s the trick so that roleplay plots don’t become one long boring conversation. I mean, it’s the difference between watching a documentary in school and a Netflix series thriller.

Keys are secrets. When you give people, places, and things secrets as you create them, you have the perfect vehicle for Key quests and rewards.

For example, the ritual requires the large holy symbol that sat atop the church since The Keep’s creation. That holy symbol is physical. You can hide it. Trap it. Put it in a dangerous location.

This makes it easy to turn information into great gameplay.

All the details about Keys and their physical manifestations become Secrets your NPCs know.

Interact with lots of people to find out what they know so players can piece together the puzzle that solves the Problem.

But people need to trust the PCs. Wrong approaches like intimidation or poor diplomacy causes obstacles.

Obstacles means information now comes with a cost (fail forward). The PCs must buy the information or perform a service for it.

As the party unlocks various Keys, the party must quest for the Key objects.

While all this is going on, Intensifiers trigger, amping up the drama, making you an amazing storyteller!

The last two secret Keys — bargain and leverage — I leave open for now. They’re not tied to objects because, unless the PCs know the entity will appear, the players can’t prepare and strategize ahead of time.

The actions of bargain and leverage can be improvised by players, meaning the encounter solution remains flexible to player decisions.

But as gameplay winds on, I can listen to players for ideas, think up my own, and add in details when I want.

As gameplay continues, players interact with NPCs in various encounters and quest for details and objects.

Perhaps the chalice lies hidden in a submerged cave along the coast. One clue for that is depicted in a terrifying painting in the council chamber.

A game of roleplay needs a purpose, an obstacle, a win-state and a lose-state where NPCs fill those roles.

We can make all this happen in three steps:

Try this approach out for ramping up tension in roleplay plots and let me know how it goes!