“Hey uncle you know why the zombies were all over the airport? Because they wanted plaaaanes!” –Tommy Booths, making yet another zombie joke.

“I have enough trouble with airsickness kid without you giving me  pundigestion.” –Riley, un-amused at the endless string of lame zombie Jokes Tommy thought up.

The groups discussion on their current airborne situation was desperate and quick, Renee reminding them of the fuel limitations the jet was under and that even empty of fuel the fumes within the tanks could still cause a sizeable explosion if they landed poorly. After a brief shouting match between Riley and Renee (With Riley blaming Renee for their airborne situation and Renee arguing back about him agreeing to the air trip in the first place) Heather interrupted to suggest they try to land in a corn field somewhere since it was a mostly empty area with plenty of room to land, Jessey rapidly agreed to the idea until Riley shook his head and pointed out the problem.

“When we land the engines are going to be smoking hot, and possibly on fire given her piloting skills, so landing in the middle of a dry cornfield is a sure fire way to burn to death in an inferno in short order.” Surprisingly no one refuted his point and the group sat in silence for several minutes thinking, looking at each other, and out the windows until Jessy’s off handed remark gave them an idea. “I sure miss my fishing boat, those lakes down there are probably teeming with bass.” (The double take around the table as everyone realized the bright idea Jessy’s player came up with was priceless.)

After the realization of their workable landing area dawned on them the group began talking excitedly about how to safely make a water landing, and how they were going to keep afloat,  Riley not relishing any kind of lengthy swim with his recently acquired injury.  A short discussion and some scrounging rolls later the group managed to locate a grade school geography book with a map of the united states, (complete with moustaches and nerd glasses drawn over the face of historic figures of American heroes.) deciding to fly until mid afternoon at a slower speed to conserve fuel and then land on one of the lakes of western Nebraska. ( Lake Mcconaughy to be precise)

Renee agreed  to the over all plan and headed back to the cockpit to make the necessary flight corrections and reminded them they could use the seat cushions as flotation devices after the emergency landing. Meanwhile Riley and Jessy set about wrapping their firearms in saran wrap and garbage bags to keep them watertight for the swim to shore while Heather volunteered to check out the cargo area for any possible supplies and Jamie worked on securing what food she could in water tight containers.

Using a emergency light from the supply closet Heather hesitantly entered the cargo hold, nearly slipping in a pool of half congealed blood, her own blood running cold when she heard a child’s voice in the darkness hesitantly calling out “mommy?” Fearing it was one of the cultists children Heather froze in place and waited, unsure whether to answer, call out to the other for aid or quietly retreat. From above three of her dogs began growling ominously. In the darkness ahead of her the voiced called out a second time, apparently that of a young girl or boy roughly between the age of 5 and 11 by the sounds of it. “Mother is that you? I’m hungry.”

Losing her nerve Heather quickly retreated from the hold and informed the rest of the group, who were of different opinions on how to best proceed. Eventually they all agreed to call down to the child and get her to come to the hole where they could get a better look at her and then either rescue or dispose of her, whichever was more appropriate. (Jamie’s mothering instinct making her react rather emotionally to her husbands casual mention of “disposing” of a helpless child,)

Leaving Heathers .44  revolver unwrapped for the time being the group gathered near the entrance and took turns calling down into the darkness to the child, and receiving no reply. After several minutes of unanswered calls Jamie urged for someone to go below and ensure the child was okay and hadn’t passed out or fallen asleep. However none of the group felt comfortable heading into the darkness, eventually agreeing to send one of Heather’s dogs, (the Doberman pincer that saved Renee earlier at the other airfield) to search for the child and then go from there.

After lowering the animal down the Doberman set at the bottom of the hole growling at the darkness, before padding off into the gloom as it seemed to catch an unknown scent. Several minutes of silence ensued broken up by the sudden barking and pained yelping of the animal, which hurriedly returned to the hole bleeding profusely from a missing left ear (Apparently torn off) and with ragged claw marks along its flank.

After struggling to haul the whining animal from the dark recess of the cargo hold Heather carried him back to Riley for help tending his wounds, (Riley once again grumbling about being a coms specialist not a damn medic) Leaving Renee, Jessy and Jamie on watch, a chilling echo from blow reaching their ears. “Mommy? I’m still hungry.”

At about this time Jessy noticed with some alarm he had no clue where Tommy was, the rest of the group suddenly realizing they hadn’t seen him for quite some time. (Leading a couple of the players to suspect it was Tommy turned zombie down below in the cargo hold.” A frantic search ensued as the group tore through the plane in search of Tommy. (Except for Riley and Heather who had their hands full treating the injured dog)  As they were about to give up and venture into the hold below in search of him, Tommy ran out of the cockpit, (the one place they didn’t think to check) yelling about the radio making “funny noises.”

Leaving the veterinarian tasks to heather and her girlfriend Riley limped to the cockpit, using his radio skill to try and clear up the faint, garbled, static ridden broadcast. A few adjustments to the radio later, (plus some successful radio operation rolls) and he was greeted to the sound of “RFA, Radio Free America, coming at you loud and clear from the top of the Rocky Mountains!” It was a radio transmission of sorts, seemingly by a survivor group holed up at a ski lodge and broadcasting the remnants of humanity via a boosted cell phone tower jury-rigged into a ham radio transmitter.

The next half hour was taken up with a brief communiqué to the survivors where they learned a little about the 32 individuals lead by a “Marcus Teague” that were trying to draw together enough people to establish a safe haven from the undead, and were actively seeking those with medical or military knowledge to contribute to their group, offering a generous reward in bullets or food to any who could aid with such info. 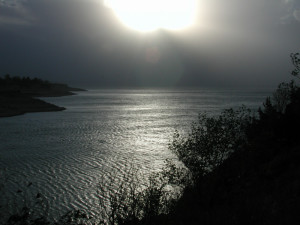 The transmission was cut short however by the fuel warning light on the jet,Renee quickly taking over the controls and dipping the planes nose towards the lake on the horizon, the rest of the group quickly strapping themselves, into their seats as Tommy made yet another lame zombie joke, “What did the zombie do after he dumped his girlfriend? He wiped his butt.” A mixture of groans and half hearted laughter greeted his latest attempt at humor, everyone seeming to all but forget about their uninvited passenger in the cargo hold beneath them.

Will the water landing be made safely? Will the broadcasters of Radio Free America be heard from again? Will Tommy’s unlimited stream of bad zombie jokes continue for the rest of their journey? Find out in the next adventure synopsis #12, coming Sunday March 13th!