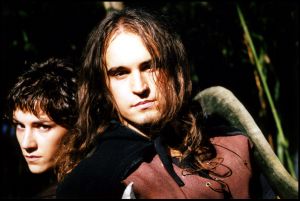 Bring some LARP into your game

Tabletop with the LARPers

I recently got shanghaied into an unusual Mage: the Ascension game with friends. The thing that makes this group different is that, unlike most gamers I know, everyone in this group got their start LARPing (Live Action Roleplaying) before moving to tabletop.

There are a few obvious differences. For one, they dress up as their characters. Not much – a leather jacket, or a trench coat and a crucifix – but enough to give you a better mental image of who they’re playing. I thought it was a bit overboard at first, but now I’m really enjoying it. When the outfits go on, it’s game time.

While the in-character clothes might not be for everybody, they do have one LARPer tradition I think nearly every group could benefit from. It’s as simple as it is powerful – they hold up a hand with crossed fingers while talking out of character.

This has two immediate benefits. One, you never again have to worry about an out of character joke getting mixed up with actual actions. Two, it severely cuts down on table-talk. Since you need to take an extra action to talk out of character, and everything you say is in character by default, you’re more likely to react in character. Instead of, “I ask him where the guards went,” you find yourself saying, “You! Tell me where the guards went!”

I know that encouraging roleplaying and cutting down on extraneous chatter are perennial favourite topics among DMs. Next time you’re wondering how to accomplish both at your table, try giving the LARPer method a try.

Low-tech Magazine is something of a strike back at our culture’s obsession with cutting-edge technology. But it’s also a great resource for gaming ideas.

A recent article on the history of using ropeways for transport – both human and cargo – has me itching to include a ropeway in my game. Preferably in a fight scene.

One recent links roundup had an image of what I only assume was a mule with a portable catapult on its back. (And if that’s not what it was, don’t tell me – I like my way better.) Who can’t imagine villagers loading that as fast as they can while trying to hold off a charging ogre?

If you’re running anything from ancient world to steampunk, I’d suggest taking a look at Low-tech Magazine.