How to Handle Pursuit Adventures 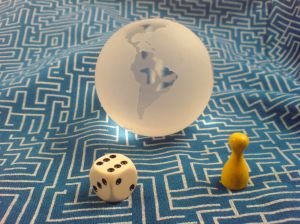 Pursuit adventures can be difficult to GM but exciting to play

I received the following interesting request from a reader about how to handle a campaign where the PCs are the prey. Below is the reader’s request, and then after that I offer some tips. If you have any other tips to add, please add a comment!

I really enjoy both Roleplaying Tips and Campaign Mastery – thanks for presenting such well thought out ideas to GMs everywhere!

I’m running a sci-fi game, and in a previous adventure the leader of the PCs was told his chief rival had sent someone after him. Someone with double his resources and known for tracking and destroying starships.

By the end of their current adventure, their pursuer (or an agent thereof) is likely to have found the PCs, at which point the theme becomes, “Hunt, or be hunted.”  This puts control squarely in the PCs’ hands. They either come up with a way to overcome a superior foe, or they come up with a way to flee a relentless enemy.

I’m aware I can’t plan for every contingency either option presents, and I have a few ideas of my own (at minimum, how the adversary will keep finding them in the vastness of space), but I could use some help.

Many thanks, and keep up the good work!

One thing you can do is put yourself in the players’ shoes. What would you do if you were them? You can better envision this by listing out what info and clues they have available. Too often we GMs assume the PCs have more info than they do, and players can only act on what they know or think they know. The chief clue types are locations, NPCs and items.

Once you have some ideas of potential PC actions, you can use these to plan ahead. And if the PCs do not make your anticipated choices, then you have game material ready to steer them towards.

Paranoia Will Destroy Ya

For paranoia, first try to abstract the hunter’s resources down two levels. You’ve already got one level – his agents.

Thus, you’ll end up with:

Next, implement the third tier in various encounters. This gives you two buffers – one for the agents and two for the villain.

It will also allow you to stretch things out. This way, as the PCs clear out the third tier, there are still a lot of gaming options. If you just went head-on with encounters with agents, the adventure would be over quickly because once the agents are finished all that is left is the villain.

Be sure to leave clues or bread crumbs the PCs can use to track things back to an awareness of links to the villain.

Further, paranoia comes from being watched, hampered or manipulated by the villain (preferably via tier 2 and 3 encounters). Generate encounters around those three themes (spied on, hindered and manipulated) and be sure the PCs know the villain is linked.