How To Use Plotto For Plot Conflicts - Roleplaying Tips
0

How To Use Plotto For Plot Conflicts

I like it when you let me know about cool tools that aren’t in the typical RPG section.

Today, Roleplaying Tips GM Jim B has a great GMing resource for us based on an old book published in the 1920s called Plotto:

Since you asked about other resource books on my bookshelf:

It was written for writers of popular fiction. While it’s oriented toward stories that would have held appeal in the 1920s, I find that it’s still pretty general, or at least not hard to transform for other settings.

There’s also a “Plotto Instruction Booklet” by the same author, because the original Plotto book can be hard to fathom.

However, I don’t use Plotto as it was originally intended for constructing a plot. Instead, I use a stripped-down approach that I find easier to adapt for RPG adventure creation.

The core of Plotto, as far as I’m concerned, is the list of 1,462 plot conflicts. They’re grouped into general themes. And each conflict is linked to other conflicts that might work as great prequels or sequels.

Each entry can seem cryptic at first. Here’s conflict #999:

The parenthesized material at the beginning of each entry suggests other plot elements that might precede this one. For entry 999, he’s suggesting that entries 611a and 1024 might be good, if you change A in those entries to NW (“ch A to NW”).

Similarly, the parenthesized material at the end of each entry suggests plot elements that might follow this one. 793a and 982a might be good, if you transpose A and A-2 (“tr A & A-2”).

How To Use Plotto For RPG

How do I use Plotto’s conflicts for adventure creation?

First, if I’m looking for inspiration, I generate a random conflict number with the following themes in mind:

If I’m not currently looking for a love story, for example, I’ll use Excel =randbetween(595,1462) to skip the romantic themes.

With the entry in hand, I decide which of the character symbols represents one or more of the PCs.

Let’s say Excel gave me 999. “A” has a difficult nephew, and he passes him off to his friend A-2. In this case, A-2 looks like a good candidate to represent one of the PCs, which makes A a friend (or other associate) of the PC. The friend saddles the PC with a difficult relative, and things get complicated as a result.

This tells us that the nephew is chaotic, not evil, but he still has a bad reputation in his hometown. As with entry 999, I can decide that’s enough for me to work with, or I could pursue the prequels further.

This has possibilities, but I want more inspiration, so I go to one of the sequels. I’ll carry forward the transposition of A & A-2. 761a becomes:

Wow, harsh, someone dies. Strictly speaking, it’s asking me to kill off a PC, because I decided that A-2 would be a PC. But I can always tweak it.

There are a few ways to run with this. It’s all just for inspiration, so I can use it any way I want. Maybe the presence of the nephew is the adventure itself. A friend shows up, says “Can I leave my nephew with you? Great, gotta run. Bye!” The nephew wreaks havoc, and the PCs have to clean up the mess.

Maybe the adventure starts with the arrival of the friend and the annoying (but adult) nephew, and the friend asks for the PC’s help as the two of them undertake a dangerous mission. The friend might or might not die in the process, but his life will be in danger.

Another interpretation: The nephew was dropped off previously, and the adventure starts with the news that the friend has died during a dangerous undertaking. Or maybe the news is just that the friend is missing. Now it’s up to the PC party to do something about the situation — delivering the nephew to a safe place, retrieving the friend, completing the friend’s mission, or whatever.

If I’m looking for further inspiration, I could start inspecting the sequels to 761a, and keep following more sequels until I feel like I’ve got enough to work with.

Another way to use Plotto is to start with some characters you want to use.

The latter portion of the book lists various combinations of characters.

Let’s say you want to use a certain female NPC the PCs already know, and you want to involve a mysterious stranger. You find that the combination “B & AX” (a female protagonist and a man of mystery) takes you to page 285, which lists 9 or so conflicts featuring that combination of characters.

Or maybe you go with “A, B & AX” (the PC party, a female protagonist, and a man of mystery), which leads you to page 279, where you find a couple of conflicts with that combination.

As with entry 999 above, once you pick a conflict, you start following a chain of prequels and sequels until you feel like you have enough to work with.

Thanks for this complex but cool resource, Jim.

I’ve had Plotto on my bookshelf for ages and have not made heads nor tails of the thing. But with your patient description, it makes more sense now.

The crazy thing is, if one is a fan of Plotto, Campaign Logger is the perfect tool for it. The auto-linking, tagging, and autocomplete would make short work and easy navigation of entries if I were to plug ones used in my campaign into the app. 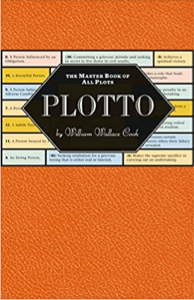