Rewarding Players With Signs Of Progress

Awhile ago I mused on how to measure sandbox campaign progress and use that to incentivize players. When we game just for the XP it becomes a grind, a job.

I received several replies to this. And today I feature two with interesting ideas for your GMing consideration.

Use A Board To Track Quests

Your tip about tracking campaign progress is timely. This past week, at our monthly AD&D game, I tried something new.

A few weeks earlier, I had asked the players to use e-mail to discuss the previous game and to see if they could tell me where the PCs planned to go.  Telling me beforehand would let me prep more efficiently.

Well, the e-mails started flying and quickly the group had about 12 different goals.

I realized they would spend all next session debating these possible courses of action, or even worse, they would unconsciously drift between various goals, getting little to nothing done (they have been guilty of that before).

So I bought a cheap cork board (36″ x 48″) on Amazon and displayed it near the table. I threw a bunch of colored push pins on there too.

I then took different colored index cards and made three columns:

I then wrote each of their goals on a big white index card.

When we started, they took 15 minutes to prioritize these goals. Finally, they pinned the cards in the correct column, giving them a visual that could keep them focused.

It really helped. After that they did not waffle or deliberate endlessly.

They also added a Done column so they could see their progress.

As the board was somewhat big, I also added at the bottom a series of 14+ index cards (one for each day in the game).

They used these cards like a calendar template. They could tell when certain wounded PCs would be back on their feet, when certain PCs were training, when they were supposed to meet with a certain NPC, etc.

The visual was badly overdue.

“When was that happening again?” went from being a common question to being almost nonexistent. It was nice.

In that particular session, I also used a black foam presentation board for something else.

The PCs were set to dine with the local baron, and there would be some political discussion.

I wanted to remind the PCs who was there and also convey their importance…all without ‘DM to player’ reminders.

I taped six pieces of paper together and drew a giant dining table. I then drew in large chairs, each about the size of an index card, and I wrote in sharpie the various names and titles.

I pinned this long drawing to the presentation board.

The players now knew at a glance who was there, what position each held (if they had forgotten), and how important they were by judging their proximity to the Baron. 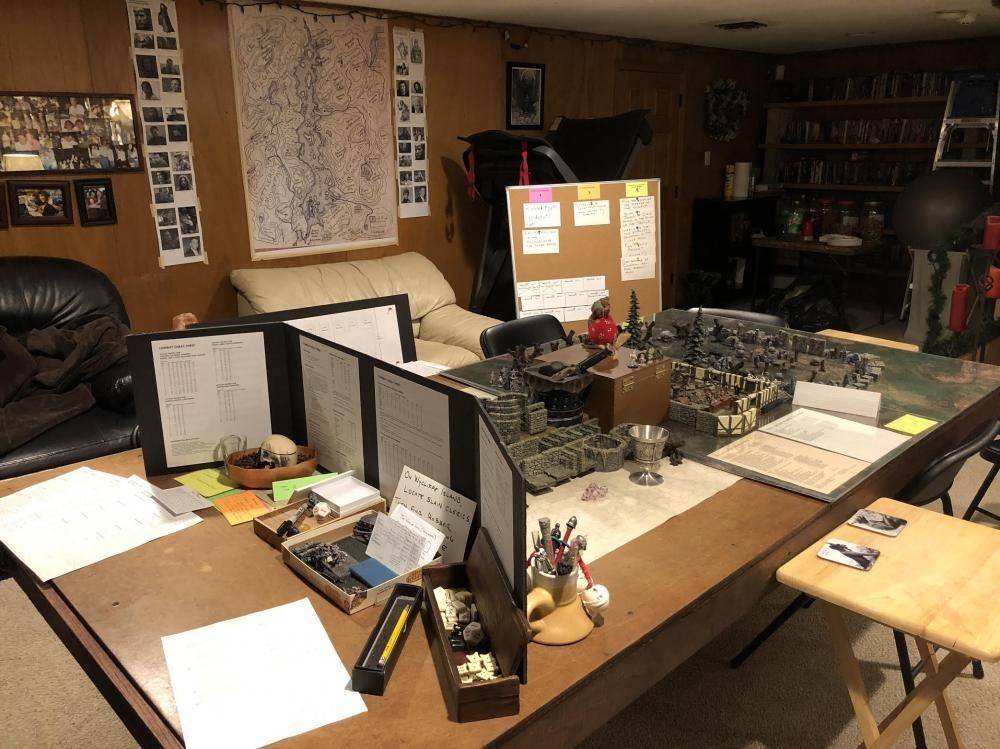 Standing it up (portrait versus landscape) makes the top visible from the other side of the table.

You can also see the wall map in the background (also easily accessible).

On either side of the map are photos or pictures of what the characters look like.

My wife is very accommodating, but all that can come down quickly, as it’s only on with masking tape. 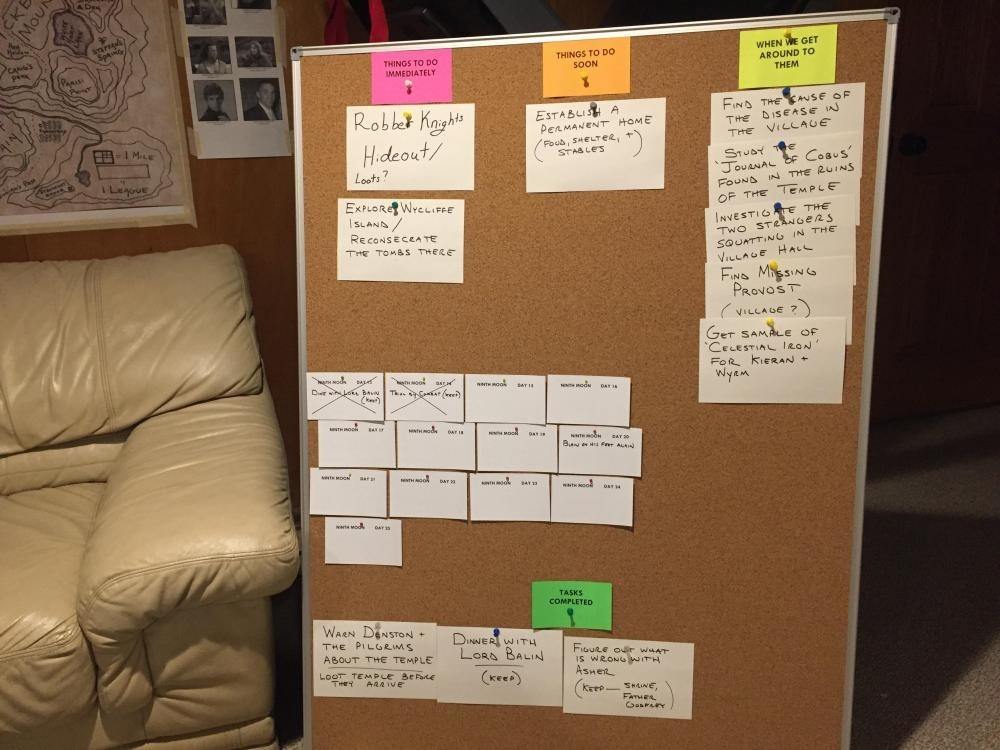 Did you ever play with the game of Life back in the day? Cells make more cells, but older cells die, and the conditions you set determine whether or not there is a net increase in the number of cells, or if the colony dies out.

While a computer might be able to provide a precise count on the number of cells at any given time, an abstracted analogue perspective with no metric measurement was still possible by estimating the capacity of the game field and how many cells it could support, and then guesstimating a percentage of that capacity that was actually filled.

Think of a sandbox game as a child’s playroom with toys scattered everywhere. Every day, a number of children are attracted to the room based on the number of toys visible on the floor.

Each child gets an additional toy or two out of storage and leaves them on the floor.

Some of the toys are behind cushions and under the furniture, but somehow, the children know they are there, even if you can’t find them.

The PCs are engaged in (metaphorically) putting the toys back, with each success reducing the number of toys present to attract children the next day.

More potent achievements may put away an entire category of toys — all the toy cars, or all the stuffed toys, for example. This provides an approximation metric of how hard it is to find another toy to put away each day.

Plots disrupt orderly life within a sandboxed game. Plots, and in particular, their instigators, also generate more plots unless the instigator is removed from the sandbox.

Just because there is no enumerable metric by which to measure success doesn’t mean there isn’t a statistical one the PCs can approximate and use as a means of measuring success towards a goal.

Players simply need to identify an overt indicator of the extent of whatever problem they are trying to solve (at a campaign level), then track that indicator to index their relative success.