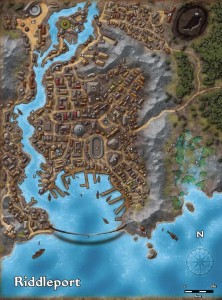 My campaign went on an unintentional hiatus but we finally got a game in this week. We stopped for Christmas, then work schedules conflicted, then I was out of town.  Feb.  25 saw Session 18 kick-off with a terrific battle against devils.

Bearded in Their Lair

The PCs had just returned to their inn after a bodyguard and escort mission involving a brief skirmish with beach hobos. The group hears a scream from the kitchen and find the cook and maid being attacked by bearded devils.

The battle took a couple hours of session time. There were five devils, five PCs, a cook, a maid, and three dead sailors involved in the fight. Near the end, the ghost of the former inn owner, Saul, materializes and warns the heroes their friend and mentor is being attacked on the roof.

The characters clean-up the devils, though the devil leader managed a teleport escape after leaving his mark, and head to the NPC’s shop next door. There they find the shop has been vandalized and looted. Their friend, Ivario the Herbmaster, was nowhere to be found.

Then they head to the roof and see signs of a fight. However, no trail or clue is found, so the PCs go back downstairs, despondent about their friend, but hopeful he has been kidnapped and is still alive.

The devils’ plan worked perfectly. While minions distracted the PCs and started a noisy fight, Ivario was successfully taken by surprise on the roof while tending his gardens.

The Hydra in the Lighthouse

After resting, the group contacts their new found fence, Wren, and arranges for a pickup of recent loot for selling. She arrives at the back of the inn with a small cart. She will return in two days with the party’s guilders (Riddleport gold pieces).

Suddenly the inn door crashes open and a guest, Lady Warren, staggers into the room with a wounded companion leaning on her for support. The PCs help them both to Lady Warren’s room and ask what happened.

Lady Warren used to own the building beside the PCs inn. In the second session, she sold the building to a gentleman named Astrinus for a tidy sum. Wealthy but trapped in port because of unusual storms ceaselessly pulverizing the city, she decided to seek out a druid for training for fun. Unbeknownst to the PCs, she is actually getting trained by a witch and has formed an adventuring party called the Diamond Rats.

Unfortunately, the Diamond Rats met their demise on their first mission exploring an abandoned lighthouse outside the city limits. She tells the PCs the whole story and gets their word she can accompany them when the PCs investigate the lighthouse for themselves.

The Rats had heard rumours of great treasure hidden underneath the lighthouse. They explored, found a cavern below and were attacked by a fire-breathing dragon with five heads. They managed to chop off three heads before the creature killed four members of the party. Lady Warren and another Rat flee for their lives and return to the inn.

The PCs help Lady Warren with healing and leave them to rest. The group then heads to the Church of Ragathiel – the paladin’s church. Ragathiel priests run a drug den and whorehouse in the cellar of a building in the Roseton district. The first floor is the church proper. Deeper in the cellar lies the planning areas, main altar and priest quarters. They profit handsomely from this operation, plus get a great deal of news, gossip and information from patrons.

The church’s business initially shocked the paladin and his fellow party members. However, the church’s rationale seemed to placate them enough for the PCs to consider a business offer the priests made in a previous session. The priests wanted to partner with the PCs and start a new branch of operations out of the PCs’ inn.

The party initially refused. However, surprising me, they decided to visit the church in Roseton in Session #18 and discuss new terms for a possible deal. Eventually they shake hands. The Church of Ragathiel will start a new drug den and whorehouse out of the PCs’ inn in exchange for providing protection, financing building security upgrades and sharing revenues. The paladin must also train new martial disciples of the church.

That messy business taken care of, the group returns to find Lady Warren sitting at a table surrounded by tavern patrons and empty ale mugs. In slurred speech, she is recounting the terrible tale of the Hydra of the Lighthouse and the great treasure still undiscovered beneath it. The characters immediately intervene and guide the lady back to her room.

With great player and character skill, the group manages to seed false information amongst the tavern patrons, discouraging them from heading the lighthouse themselves. Whew!

The following morning, the PCs head to the lighthouse, but without the Lady Warren. Interesting.

At the abandoned building they encounter the hydra, now with eight heads. In an amazing feat of combat prowess, the creature is dispatched in mere seconds. (Note to self, do not let the PCs team up on foes.)

Leaving the hydra’s cave through a tunnel that meanders deeper underground, they emerge into a strange cavern with several exits. Beside each exit is a face carved out in relief. The dwarf decides to scout the cavern out while the rest of the party watches on.

As the dwarf examines the cavern for traps and secrets, a terrible creature leaps at him out of the darkness! With soft, golden fur and a fluffy curled tail, a small cat runs at the dwarf. Before the stout priest can hold out his arms to catch the cuddly little thing, the cat lashes out with its eight paws, grabs the dwarf, and drags him back into a dark alcove.

Stunned, the PCs approach cautiously and use ranged weapons to attack from a distance. The small feline purrs softly as she feeds the dwarf to her two cute kittens. They proceed to bite the dwarf’s face and arms off. Mother joins in the fun and the dwarf is down for the count. Forever.

A tough battle ensues and the PCs finally manage to bring the three little animals down. Scratched and bleeding, the PCs grab the dwarf’s body and make to head back to the city.

We ended the session there. There is a lesson here, somewhere, but I am not sure what it is. I think it is that karma gets you in the end. Doing an end-run around Larry Warren resulted in PC death. Rats.

For Christmas, my wife gave me a baseball cap that says Killer DM in gold letters on it. I wore the hat during the session, and lo and behold, it brought me success. I had a great night’s sleep afterward. I dreamt of kitty cats and screaming hydras demanding retribution.

P.S. For everyone concerned about the dwarf, the party plans on getting him raised. He had not signed Astrinus’s contract, but the party should be able to figure something out. That’s what I love about my players. They keep getting back up!