The Best Adventure Structure For You? - Roleplaying Tips
0

The Best Adventure Structure For You?

Here’s where I’m at currently with how I build and run adventures in my games. It’s the core design approach for my Demonplague campaign and for my Murder Hobos Season III game.

Before I dig into that, did you know I can’t carry a beat for more than a few bars? I get out of synch with any kind of linear or repetitive task pretty quick.

One time they even put a metronome in front of me and asked me to play along with that. Within seconds I was off-beat. Every. Time.

So it’s no wonder I don’t like scripted adventures. Within a few encounters I’ve broken the plot. Every. Time. 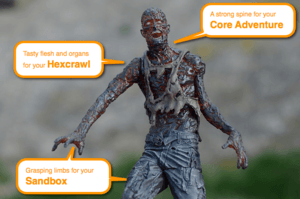 However, I do enjoy having a core plot arc running along with me. It’s something I weave the story back into, Loopy Plot around, and run my key factions on.

It’s like a comfy blanket I can snuggle into after my blood turns cold after Murder Hobos murder hobo.

The core adventure is like the spine of my campaign.

If I don’t have a core adventure of my own making going, then I grab one off my shelf and change what I need. Recent ones include Princes of the Apocalypse, Riddleport (Second Darkness from Paizo), and Sunless Citadel.

The rib, femur, and humerus bones that attach to the spine are my sandbox.

Sandbox to me means giving players a region map with intriguing adventure sites labeled so players get curious, explore, and take risks.

There are different kinds of maps, too.

For Murder Hobos and Demonplague I’ve got a faction map. It’s based on relationships, resources, and power.

Introduce PCs to each faction and agenda (via encounters and gameplay) so players get curious, involve themselves, and take sides.

I’ve also got a conflict map. Dungeon World calls it Fronts and Dangers. It’s based on agents, stakes, and plots.

Start off with encounters revealing these deeper conflicts so players get curious, become entangled, and take action.

Leave places on your maps blank. Create fog of war for both you and your players.

As your campaign unfolds, pull back the fog and put whatever fits for synchronistic plotting, player agency, and awesome gameplay in there.

Hexcrawl is the organs and flesh of the campaign.

There’s a whole world to explore within your snowglobe. Discover it together.

All such maps are affected.

This structure is not just about player choice. It’s about GM choice.

The Core Adventure gives enough static content to bail me out when needed, guide me when asked, and anchor prep with.

But most of the campaign is ad hoc.

Hexcrawl lets me off the planning hook entirely while presenting a dynamic and connected campaign.

Tools like Loopy Planning and Campaign Logger help me stay on top of things at all times.

We’ve got an entirely new medium on our hands. We’re not writing static books. And we’re not building bounded video games.

Right now, Core Adventure + Sandbox + Hexcrawl gives me the best of all approaches.

Players go left? No problem. You’re ready for left plus the other five sides of the hex.

Players make peace instead of war? No problem. You don’t have to be ready for anything. Factions, Conflicts, and Fog of War let you roll with it.

This blended structure has certainly built something special for GMs who run The Demonplague Campaign.

And I’ll find out how it goes when I resume my Murder Hobos game.

It works even for hacks like me who can’t carry a beat.