RPT GM Scott Barrie asked me about how I use knitting row counters to finish fights faster:

Do the knitting counters speed up combat? That’s something you do during the players turns. Letting the players manage the damage they do seems like it would slow down combat.

First, here’s a pic of my row counters. I store them in a recycled chocolates box along with my chart pointer (aka extended minis mover) and laser pointer: 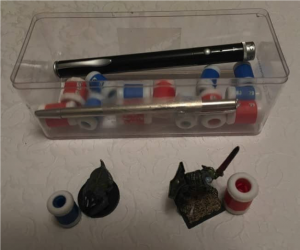 Each counter has a tens unit and a ones unit.

Just turn the left or right side dial to increment units.

Our group tracks damage done to foes with these things. We note damage on a row counter and place it beside the wounded mini on the battlemat.

As minis move around the combat area we move the damage counter with them.

When players do damage, or damage accrues to foes from hazards or other special effects, players adjust the damage counters between turns.

Most often damage calculation is the last thing done on a player’s turn. When the spotlight shifts to the next player in initiative, the previous player updates affected row counters.

So no game time is wasted waiting — damage counters are updated between player tuns.

Also, I ask players to update damage counters for party NPCs so I don’t need to track their wounds. At any time I can check a counter to see if an NPC is on death’s door.

Finally, you can track more than damage with these things. You can track spell effects, countdown events, action points, etc.

I like these row counters because dropping them or hitting them does not affect the number showing. When using dice to track stuff, for example, guaranteed it’s going to get jostled and lose its number, or I’ll have a brain fart and roll the dice for something and lose the counter.

Does anyone else use these? Have you found other ways to hack them or track things with them?