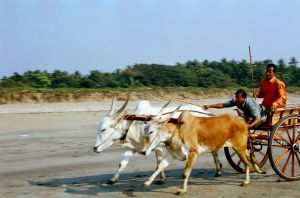 How you GM a pursuit depends a little on what sort of pursuit it is.

The enemy is always within sight, and you need to try every trick you can to get away.  This includes cinematic chases with shooting and dodging, but can also include the more subtle psychological pressure of having a foe just on the edge of radar, following but not engaging.

Getting away is often a matter of doing something your foe can’t or won’t do (navigate a minefield, jump to hyperspace, hide in a gas giant).

The other ending to a hot pursuit is engaging the enemy, whether you crash, they catch you, or you turn and face them.

The enemy is not within sight but is following your trail.  This becomes more a game of how to confuse or eliminate your trail, depriving the pursuer of clues to your location.  You can also lay traps and ambushes to weaken your pursuers.

The trail can be footprints, ion trail, credit card purchases, talking to witnesses, and so on.

Trailing pursuit can heat up and become hot pursuit, or the trail can “go cold” and the pursuers must give up and try a different method (hunting or forced).

If a trailing pursuit goes to engaging the enemy, then one side will normally have surprise (depending whether they catch you napping or you ambush them).

The pursuer tries to predict where you will go next and waits there for you. They need to know you for this to work. If you are injured or your ship damaged, then hospitals and repair yards will be staked out.

The pursuer forces you to come to them. This is most commonly done by threatening to destroy something you hold dear, but may also be by more subtle means such as buying up all of your medication (or fuel or parts), so you can only get it from them.

This is not really a pursuit as such, and it often ends with a break and enter style infiltration into where the goods (or hostages) are held, or with a type of hostage exchange ploy.

In all of these, generating a feeling of fear and paranoia requires the foe to be a credible threat. If they feel they can turn and fight with a good chance of victory, then there is nothing to be afraid of.

You need to demonstrate the threat level they are facing (i.e. have PCs find the debris of the foe’s last victim – someone the PCs feared or respected).

Some fear comes from uncertainty. The PCs should know the enemy is nearby, but you can’t see them.  They should know his name but not what he looks like. The formula “you know X, but not Y” is a useful one, especially when X indicates a threat (i.e. there is a bomb in a school), and Y is what you need to know before you can act (which school).

Some fear comes from threat. The PCs should feel the foe can hurt them in ways that matter. Physical harm is just one way. A foe to be feared should have several. They can hurt your friends, ruin your reputation, steal your stuff, frame you for crimes, strand you in space, imprison you, blackmail you, insult you.

The important thing is hitting the PCs where it hurts. If the PCs are loners, hitting their friends is pointless. If they value their reputation, besmirching it is something to fear.

Then you just have the characters notice things around them. The custom officials have unofficial “wanted” pictures up in the office. Their waitress makes a phone call as they leave the cafe. The same homeless guy who was outside the spaceport is outside their hotel.

These may just be random chance: the waitress was calling her girlfriend, the homeless guy got a big handout from a business man, so he followed him to this hotel, the customs official tries to remember everyone’s names so he keeps photos of current ships crews in the office. However, they could also be part of the insidious web that is tightening around the PCs.

Overall, fear and paranoia are tricky in RPGs, because PCs are almost defined as brave and independent people. They are fearless and do not need others to help them, so fear and paranoia do not come naturally to them.

It may help to ask, “How is your character feeling?” or even more bluntly, “Are you trusting them?” This normally makes the player double-check, and can remind them their character should really be feeling somewhat cautious and suspicious in this situation.