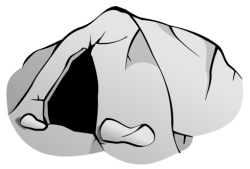 If you’re anything like the typical GM you have at one point or another asked yourself the following question: What do you do if the players don’t do what you wanted?

The question underlines a classic GM problem. As the GM you are expected to be a storyteller for your players (some games even call the GM the storyteller, which is just wrong). But at the same time you’re supposed to tell this story in which the main characters of the story (the protagonists if you will) have their own free will to wander hither and thither as they want to. What’s an honest GM to do?

Basically the idea of this article, as awful as it sounds, is to lie and cheat like a bastard and then make up for it later. You lie and cheat in order to make your gaming material fit what the players want to do. Then, later, after they leave, you re-write like crazy everything you prepared for the next game to make it fit what they did.

Lying and cheating to your players may seem like a bad thing but it all comes out right because actually you can give them a lot more freedom in the long run if you use this strategy. Anyway, don’t tell them you’re doing it, either. 😉

Perhaps it would be best to tell an anecdote that will explain the title of the article. This is a true story. I swear I heard it from someone who knows someone who was there, and it was all documented on some list archives at Monte Cook’s site that got deleted because they were too old. So anyway…

Picture an ancient gaming convention seminar on GMing. The speaker got up to talk about a game they once played. They prepared a troll cave for the PCs to explore. The players came to a fork in the road and decided to head right, where after a few hundred metres, they noticed up ahead, there was a troll cave along a ridge to the side of the road.

Unfortunately, the players didn’t want to risk a troll cave and they decided to give it a pass. So they went down the other fork in the road. What’s there? I’ll give you three tries to guess it. OK, time’s up, it was a troll cave (of course ……) Needless to say, the players were a little irritated since they didn’t really want to explore a troll cave. So they went back the way they came … and encountered another troll cave!

“How come we didn’t see it before?!” they protest. “Well, you just didn’t notice it before” replied the GM evenly. He had a troll cave ready so everywhere they went: troll cave. I have no idea if the players eventually gave in or what, but that’s beside the point anyway.

A lot of you are thinking this GM is a crappy GM and apparently, at the con, he took a fair bit of heat from the audience. But fundamentally he was right. He had prepared a troll cave. Why should he suddenly have to wing it just because his players didn’t want to play what he prepared?

I think the seminar presenter was a little simple-minded in his approach though. Think about how he could have covered his tracks and fooled the players. He could have said, all right, you go left, and there’s no troll cave. There’s an inn. Great, say the PCs, we go in and have a beer! He says, OK, the inn’s empty. Weird. The PCs are piqued. You hear a faint moaning sound from the cellar. The PCs go to explore. The cellar has a hole broken through the wall, and when the PCs explore they discover … a troll cave! Hah! Take that! The GM can always win 😉 (but don’t gloat or they’ll know …)

Clever eh? Just a little bit of simple misdirection, a change of paint, some window-dressing, and the GM has finagled the PCs into playing the very scenario they tried to avoid earlier. Are they annoyed? Well… that all depends on how the GM plays the scenario out. If the troll cave connects through elaborate tunnels to the original troll cave the PCs avoided in the first place, they might think that it was all played from the book, as prepared ahead of time. In fact … instead of being annoyed they might be supremely impressed at the GM’s incredible planning abilities. And if you can keep your grins of gleeful mirth hidden behind your hand, you can continue to play this kind of trick on the players endlessly.

But How Do You Justify Such Trickery?

I’m not going to justify this kind of behaviour beyond the obvious ? it will save you as the GM a lot of trouble and hassle when your players go the other way.

Actually, there is a way to justify it. The key is what you do after the session ends. At this point, you have a week, or more, to adjust your future plans. You’ve got time to take out the prep-work and make adjustments that take into account the players’ new direction.

In this specific example, the GM might scrap their previous plan to dive into a gritty underdark campaign and instead develop into an above-ground, interaction-with-the-locals theme. I’m just making that proposal based on what the PCs in the example seem to want. They seem to have expressed a preference, maybe, for building-oriented adventures over dungeon adventures. Don’t assume it, ask them. Use their feedback for your future designs.

If you do that, everyone comes away with something gained. You get to use your carefully prepped adventure even if the players cry havoc. The players ultimately get a campaign more closely tailored to what they want. It’s a win-win situation. (Just don’t spill the beans 😉