Conversation Skills in an Action Game 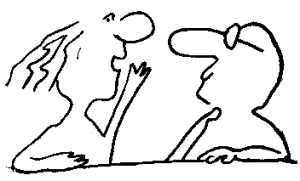 Conversation, persuasion, oratory and seduction can pose special problems to new and experienced GMs alike. These charisma-based skills are often treated differently than physical skills. When a PC tries to use a physical skill, the GM assigns a difficulty based on the situation at hand, and the player rolls against his skill. A successful roll means the player succeeds at the task. A failed roll means the character fails the task. Of course, it is not necessarily this simple. Depending on the magnitude of the success or failure and the situation, partial failures and successes may occur with their results determined by the creativity and cruelty of the GM. Many intelligence-based skills work in the same way; a die-roll determines the success of the task.

The reason for this is simple. You cannot role-play most physical skills. When the PCs, fleeing a ravenous band of goblins, comes to a chasm and needs to leap to safety, the GM cannot very well ask that the players get up from the gaming table, drive to a convenient ditch and perform the jump to determine the fate of their characters. It?s unfair to ask players to be as strong, fast and agile as their characters… and all that ditch digging can be inconvenient. Intelligence skills have the same issues. It is hard to have a player figure out a complicated magical formula when he is struggling through calculus.

Oddly enough, we gamers have a bit of a double standard when it comes to charisma-based skills. When the PCs are trying to persuade the NPC to give them information, the GM generally does not leave the resolution of the situation up to a skill roll. Instead, he will play the part of the NPC and the players will talk for their characters. Based on the real-life conversation, the GM will determine how the NPC reacts and if the PCs get their information.

This “double-standard” exists because role-playing games are nothing more that exercises in imagination and conversation. Thus, it makes sense that any aspect of the game that involves talking would be played out and not just diced. This is the “role” part of the role-playing and the conversations that characters and NPCs (i.e. GMs and players) have give the game flavor and are an important part (some think the MOST important part) of RPGs.

However, this attitude toward charisma-based skills can create a few unwanted situations. For one thing, though a weak player can play a strong character, and in most situations, a player of average intelligence can role-play a brilliant mage, or scientist, a person with below-average people skills will have a difficult time playing the smooth-talking con man, or the diplomat. This is because, unlike his mage and fighter companions, the con man’s player actually has to DO his skills, instead of just rolling for success. He has to talk to the NPCs and be convincing. If the player does not have the conversation skills, he will not be as successful as his character’s skill level would indicate.

Many GMs mix role-playing with die-based resolution. When a charisma skill is used, the player role-plays the situation for a while and then the GM adjusts his skill roll accordingly. This gives the below-average talker the ability to succeed at conversation skills due to his character’s skill, while preserving the role-playing aspect of the game. However, what happens when the player gives a great speech and still blows the roll… or flubs the speech, but critically succeeds on the roll? What about the situation where PCs determine that they are getting nowhere with a particular NPC and in desperation point out that their character has the conversation skill at such-and-such a level and can they make a skill roll? These situations are unsatisfying and can feel contrived.

I suggest a simple change to conversation-based skills. When one of these skills is used, the GM should determine a difficulty and make a skill roll immediately. The GM should not use the results of this skill roll to determine the success or failure of the attempt. Instead, take the skill roll and base the tone of the conversation and the initial reaction of the NPC on that roll. A successful skill roll means the NPC is favorably disposed to the PC, or is caught off-guard by the character, and might have useful information. A failed roll mean the NPC is wary, has no information, or is downright hostile. After this initial roll, the player’s role-playing skills will determine the outcome of the encounter.

For example, PCs are skulking about the city at night. A guard comes upon them and the group’s confidence man uses his fast talk skill to convince the watchman that the group is breaking town curfew to innocently look for the lost kitten of a friend. The GM decides on a difficulty of the skill roll (based on the experience and intelligence of the guard or any other factors the GM wishes to include) and the player rolls.

If the player succeeds in the skill roll, then the conversation begins with the guard favorably disposed to the party and their story. Perhaps he is a green recruit, or gullible. Perhaps he is taken with a female member of the group and if she does the talking, he is bound to believe her story. Perhaps he stopped in a local pub and is noticeably drunk. If the PCs notice and threaten to tell his superiors, he may let them go just to get away from them. Perhaps he will give the PCs a hard time, but is open to graft. In any case, the successful roll does not necessarily mean that the encounter is successful. Instead, it means the GM needs to provide the players with a NPC who will believe a credible story, or has some hook which will allow a successful resolution.

A failed roll means just the opposite. The guard is suspicious. Perhaps there have been some crimes in the neighborhood and the guard is on the lookout for any after-hours activity. Perhaps the PC looks like a perpetrator of a similar crime, or has a feature (or is of a race or ethnicity) that the guard does not like. Perhaps he is just experienced and has heard this story before. In any case, the encounter should be difficult and only the best role-playing (and in this case, fast talking) will get the guard off the PCs? backs.

This approach to conversation skills has a couple advantages. First, it uses both the game mechanics and role-playing equally. A character with a high skill will have an easier time using his charisma-based skills even if the player is not good at the skill. This is because successful skill rolls bring about easier role-playing situations.  On the other hand, role-playing is still required to bring about a solution to the encounter and good role-playing is rewarded with successful outcomes to failed skill rolls.

Second, this approach gives the GM a guideline as to how tough he should be on PC confidence men. How easily should the NPC give in? How gullible should this person be? If the NPC is one that has been written and developed, then these questions are easy to answer. However, in the case of our guard, the GM has probably not prepared any information on this NPC?s personality and so the skill roll provides a good guide to how this person should behave toward the PCs.

Third, a good GM can have a great deal of fun with this system. A bit of quick thinking can lead to many interesting and humorous situations. Let?s get back to the guard example. On a particularly bad failure, the PCs give their story and the guard, so overtaken with sympathy, offers to travel with them and help find their kitten. This could lead to a wonderful subplot where the PCs have to find a way to ditch the guard, or get their skulking done in spite of him.

Another possibility is that the guard recognizes one of the PCs and, based on his reputation and position, either arrests him on the spot, or causes trouble for him later. Critical successes could lead to improbable good fortune such as a kitten strolling out of the bushes just as PCs finish their story, or the guard in question being an old friend of one of the PCs.