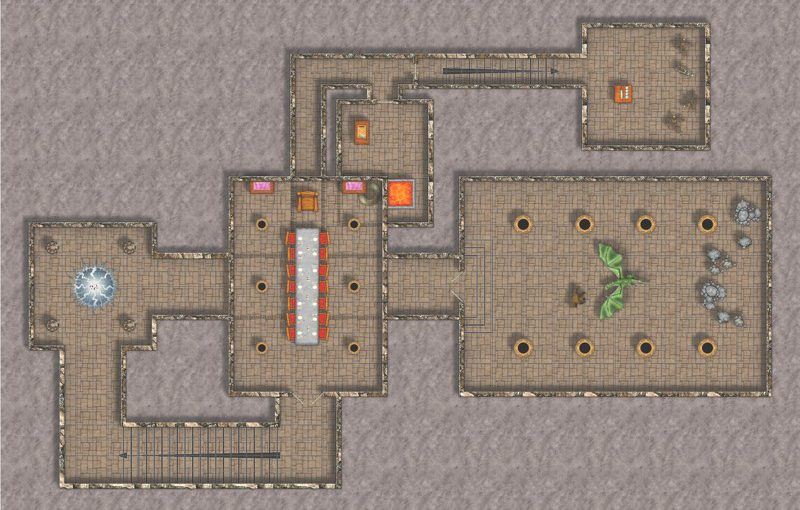 For my recently started MMO (moderately multi-player offline) campaign I have been looking for a format which eases on my GM workload and still provides an entertaining experience for my potentially changing player and character audience. Luckily, Johnn Four shot me a link to his 5 Room Dungeons which was exactly what I have been looking for.

On top of the format, managing a changing audience that potentially crawls the same dungeon more or less concurrently asked for a tool that allowed fast, easy and effective note-taking while I am moderating the table at the same time.

Previously, I used a combined approach of printed adventure notes and a notebook, which in theory got synchronized between sessions. Effectively, this approach yielded many ideas now drowning among notes in dozens of notebooks – they just got lost as I had no easy way of retrieving them.

Twice lucky me, I am the developer of Campaign Logger – a tool originating from Johnn’s mind, brainwaves full of experience crystalizing (yes, it’s an ongoing endeavor) into bits and bytes.

The General Format of 5 Room Dungeons…

5 room dungeons are a story arc manifested into a location. It does not expect you to have exactly 5 rooms, just around 5 general encounter (areas).

You may want to follow me along, so just start up Campaign Logger and login (if you already have an account) or register (if you are new to Campaign Logger, no worries, trial registration is free and time-wise unlimited).

So, how should this be structured in Campaign Logger? I decided to first create an entry containing brainstorming material supported by some random rolls on tables from Pathfinder’s Game Mastery Guide.

I always wanted to see something involving an Ogre Mage, though as the characters would be level 1, I would need to find a creative solution to this wish. Asking for random results (which I interpreted freely) I got a “menagerie” under a “nest”, accessible through a “cave”, with a “kitchen”, a “cursed storeroom”, and an “observation room”.

The Menagerie of the Ogre Mage was born!

In Campaign Logger I am able to semantically “tag” words (or sentences) by adding a category symbol. For example, @Conan indicates an NPC, and the word “Conan” gets auto-linked to a list of all entries that use @Conan. It’s kind of like a wikiword, if you are familiar with wikis.

An entry in a log (I am using one log per campaign) can hold 2500 characters, so I will split my preparation work up into several entries.

During session prep I usually mark all terms (monsters, ideas, etc.) I use with an asterisk * whose category I named Planning in my Campaign Logger preferences. For example, I tagged *”Ogre Mage” in the screenshot above.

The menagerie itself and its rooms are locations I normally tag with the hash sign #. In this case, I decided to tag them using the section sign § as they are the sections/parts of my upcoming scenario.

For example, §”Trophy And Dining Room Of The Menagerie”. That way I better distinguish between meta-information (the parts of an adventure created during preparation) and in-game information (the actual places named by people living in the campaign world).

The next step involves an entry that collects the five rooms of my dungeon into a neat overview for later reference. This one I could extend as needed or use additional entries for each room’s detail, intelligently linked together by Campaign Logger.

Cave Of The Dire Bats & Lair Of The Ettercap

Going for one entry per room, I write down a short description of the cave, add links to the monster stats, and include notes on tactics and any skill challenges I can imagine right now. 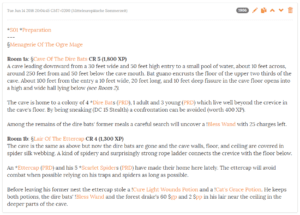 Exhibition Hall Of The Menagerie

The next room, reachable through the cave’s floor, is the “exhibition hall” of the menagerie. I browsed for some interesting monsters and froze them in time, making the ornate pillars supporting the ceiling into a kind of great magic stasis item. This exhibition will feature a dragon and his treasure, though in different states depending on who lives currently above the hall. This will be a nice puzzle for the groups and maybe someone will even try to “Use Magic Device” on the pillars.

The third “trick and setback” room will be actually two rooms: a folding kitchen and a cursed storeroom. The kitchen will be populated by two giant knives animated by the residual magic of the place. Some gruesome items and a big key on a chain hinting at the storeroom that I re-imagined as a dungeon to store the once sentient meat a typical ogre seems to like. A big kettle and a once magically heated lava pit complete the furniture here. The storeroom below will hold the last four now rather skeletal prisoners and four teaser stones.

Portal Room Of The Menagerie

Room number four will be a junction between the former rooms, the last room, and other dungeon levels. I decided to put a teleport ring into the floor with four depressions within the ring – curiously the size of the teaser stones. An allip will be haunting this place, the remnant of the former major domo of the Ogre Mage who killed his master and was in turn killed by the dying mage. The undead might be difficult to subdue, but the fifth room contains a little towards that.

Trophy And Dining Room Of the Menagerie

You will find all the details of The Menagerie of the Ogre Mage in the linked Campaign Logger file. Import it into Campaign Logger as a new Campaign Log and browse it as a sample of how I am going about using the logger in session preparation. Feel free to also use the dungeon for your games. Have fun! 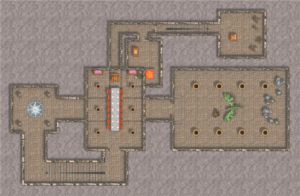 Appended you will find the map of the dungeon as a JPEG file and in Campaign Cartographer format, and the dungeon description in Campaign Logger format. Use them under Creative Commons Attribution-ShareAlike 4.0 International (CC BY-SA 4.0).