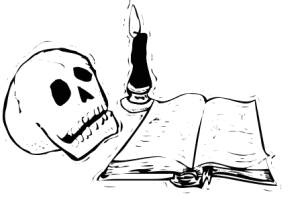 Fear. One of our strongest emotions, and yet one very difficult to conjure up unless it’s genuine. It can be fleeting or eternal, gentle or monstrous. But how does Fear apply to RPGs?

It is important to note that not every roleplaying game would benefit from a sense of impending doom, of a sniper on every rooftop and a cutthroat down every alleyway. This is something each GM must decide individually, whether the sense of urgency is worth the effort.

Creating true fear in an RPG is a very difficult task because there’s an innate expectation that the “Good guys [PCs] will win in the end”. With that expectation in mind, of course they don’t take it seriously when you threaten to blow them all off the face of the earth. This is the first situation that needs to be rectified.

A lot of very good movies have started with a sequence of powerlessness. Even “The Matrix”, where the heroes possessed exceptional abilities, began with the heroine running furiously. If at all possible, begin your game in this manner. Make it clear to the players that their phenomenal health isn’t going to matter if a sniper puts a bullet through their eye. Even when the players have accepted that they can die, though, it is still difficult to inspire a fear-filled atmosphere.

One of the things most detrimental to creating fear is knowledge. If a player is at all aware of a situation, he will be less fearful of it. It is also very important to destroy the feeling of immortality that players seem automatically to possess. Demonstrate that a single ambush can end a character’s life, and demonstrate it very clearly. By this I am not suggesting you massacre your PCs; start with NPCs. As their friends start dying they will become more and more paranoid. Only if all else fails do you kill a PC, but if you are forced to do so, insure it occurs in such a way as to provoke the maximum possible amount of fear. Depriving a player of their character is never a kind thing to do, and must be addressed on a group specific basis. In some cases this may entail replacing it, guaranteeing a lucky break for the re-rolled character, etc.

The difficulty a GM often faces in creating the effect of powerlessness essential to fear is that it will often cause the players to lose interest. A good way to solve this is to make the ultimate goal easy enough, but the obstacles a challenge. In many novels the evil lord is taken down with relative ease, but his nigh-immortal infantry is a source of terror up until the moment of triumph. Capitalize on this. Perhaps the classic example is the immortal undead faced in many different works of fiction. Not very threatening, and generally only average in skill – if you could kill them. The immortality, the fact that, no matter what, the skeleton you faced yesterday could be around the next corner, that’s what makes it frightening.

Something I often to do to soften the effect of powerlessness on my PCs is to divide the overall goal of the game into smaller pieces. This way you can sprinkle completions of these mini-goals throughout the adventure, which will temper their frustration. In fact, it can provoke an effect that will actually boost morale. “Those guys were immortal, and we beat them anyway! Yeah!”

Very important to avoid is the trap which arises from too much fear, wherein the players are so suspicious of everyone and everything that the game bogs down and progresses at a snail’s pace, as hours are spent interrogating peasants on the road. This is the worst possible situation for the GM. Hints given IC to signify the safety of the situation would be disregarded as red herrings. Likewise, if OOC hints are employed the players will then utilize the lack thereof in the future to be aware of a planned set up – ruining the effect of paranoia altogether.

There is very little that can be done to escape the paranoia trap; my suggestion would be to immediately cease the cause of said paranoia, allowing the players to become slightly more trusting. Once you’ve ‘successfully’ gotten into a paranoia trap, you’ve determined that you can scare the players – this is a good thing. One other method that often serves as an escape to the paranoia trap is to drastically change settings. If the players are terrified on Continent X, try giving them a boat ride to Continent Y – they may treat it as a ‘clean slate’, and fear less.

Remember, there is no perfect balance, and in this short article I’ve touched on just a few of the many possibilities. Be sure to check back in the future for additional thoughts on this complex issue.