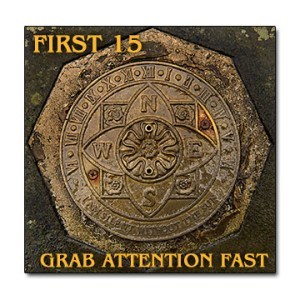 I am a fairly new GM, and while I have some skill I still have a lot of questions.

We all know people have short attention spans.

So if you are going to get people excited about your gaming session you have to grab the attention of nearly every player in the first few minutes of a session.

In my experience you need to get each person to complete at least one action within the first 15 minutes of play.

These first 15 minutes are even more important if your group meets for less than 2 hours, like mine does.

What I am wondering is how do you set up and execute your first 15 minutes of a game?

The tactic I have adopted is 2 prong. First thing I usually do in a session is have the party get attacked by some small creatures. Nothing powerful enough to make it a challenge, but something to get them moving, talking and rolling dice. Once that is done they usually start talking to each other.

Second, I will reward a player for asking another character (PC or NPC) about their back story. This gets them role playing.

This approach works well with my group because it breaks the ice with the gaming side of an RPG. Once they are comfortable they really start role playing.

I am sure other GMs use other strategies and methods. So what does everyone else do?

Juaquine, you took the first tip right out of my mouth. Start with action.

I run action- and combat-oriented games. I try to capture the feel of Indiana Jones meets Godzilla.

So I like to roll initiative and jump into a conflict right away during my First 15.

Knock the GMing dust and cobwebs off, get everyone excited and focused, and kick the session off with a bang (or a pierce, slash or bludgeon).

You also made a good point of not making the first combat take all night.

I aim for 30 mins or less for all my combats (except boss battles or major plot fights).

So anyone trying this tip should ensure the fight that started the session doesn’t also end the session, lol.

In a past edition of RPT, I gave the tip to start sessions with “Roll for initiative!”

Try it. It works.

2. Pick Up Where You Left Off

Another great GMing technique is to end sessions with a cliffhanger.

If you do that, then you have probably the best First 15 start point you could ask for.

First, they involve story. Even if it’s just how the fight will turn out. Will the injured PC bleed out? Will the boss escape? Will the descending ceiling crush all the treasure?

Our brains want resolution to all open loops.

There’s a whole school of emerging neuroscience that shows how our brains “work” in stories and how they desperately seek closure. Two sides of the same coin, and a very effective way to learn and remember.

So you’ve probably heard the cliffhanger tip before. But here’s a couple extra details to get even more out of this GM technique:

Setup Communication Channels For Your Players

Your goal is to get players talking between sessions.

And the cliffhanger is going to be a natural hot topic.

The more they talk about that, the greater the anticipation for next session.

The greater the anticipation, the more eagerness and energy in your First 15.

It’s easy to end sessions mid-fight. But try to mix-up your hangings.

Roleplaying encounters – how will the Sheriff respond to the PCs’ revelation? Chairs or chains?

Skills – the thief rolls a 15. The lock clicks once. Trap or treasure?

Chases – the villain kicks the block out from under a cart wheel. The cart rolls downhill…straight towards an unsuspecting pregnant woman and her two children! Rescue or run past?

There is really only one best way to create a cliffhanger, and that’s to hang the players mid-story.

It doesn’t matter what type of encounter it is. You just need to stop the story right at a juicy part.

Like those http://www.radiolovers.com/pages/scifi.html timeless old radio shows and serial stories do so well!

[RPT Weekly E-Zine Issue #353 How To Leave Your Players Hanging — 4 Cliffhanger Tips Here are some more tips on cliffhangers.]

Kick-off your First 15 with a recap.

Get a player to do this so you can work on GM stuff and get your game face on while everybody listens.

I have two conflicting tips for you about this.

One, pick the best storyteller in your group for the recaps. This player will do a great job most nights putting everyone in the right mood and mindset while reminding everybody about what happened last session.

Two, pick a player who needs practice roleplaying, storytelling or speaking up. The recap will encourage them to talk more the rest of the session.

Maybe mix it up. Do what’s best for your group. Maybe rotate the honour.

Regardless of approach, I want you to make your recaps do one thing.

Think about the intros from TV shows. Many do great recaps. They clip key moments, great visuals and big plot points to get you the viewer engaged right away.

Aim for the same for your recaps.

And focus more on the story and key plots than specific details.

Instead of telling how many hit points the big troll had, tell how the troll howled that strange name with his last burning breath.

Instead of telling how Bob made his stealth check and spied on the evil mercenaries last session, tell how Garrus the rogue snuck up on the group’s hated foes and learned the Sheriff is secretly paying them to stop the party.

Instead of covering just last session’s events, recap how the characters started out as weak commoners who fled their burning village, who then survived DeathHell Dungeon and emerged toughened heroes, and who are now on the verge of discovering the identity of the villain who burned their homes to the ground.

Here’s your chance to get rid of all that pesky game rule talk and numbers essential for gameplay, and to tell a story of the campaign so far like a true storyweaver.

Use recaps for story, not numbers.

Ok, those are three tips from me for making your First 15 awesome springboards for exciting sessions.

What do you do to launch great game nights?

This is more for my Gamer Lifestyle fans, for gamers looking to learn how to publish their RPG work and earn a reliable side income from RPG.

But I thought you might be interested too. I did my first Google Hangout interview and recorded it.

I spoke with Sean Patrick Fannon, who has turned his 36 year-old homebrew game world, Shaintar, into a best selling product. And now it’s a Kickstarter project.

We chatted about how to make your game world unique, the multi-stage writing experience, and tips for gamers new to RPG publishing.

I was pretty nervous to start, but my Toastmaster skills soon kicked in and I felt pretty comfortable by the end.

You can watch the interview on YouTube: Gamer Lifestyle: Interview with Sean Fannon

Last week I hopped onto the Roleplaying Tips Google Community to talk about a currency I had for Chaos Keep.

I like doing world design this way. Because if you follow the discussion, you can see bottom-up development happening on-the-fly. Two interesting factions emerged, plus a couple of plot ideas. Cool stuff.

Here’s the idea I posted:

In Chaos Keep, the kingdom’s currency is rare. Trade is infrequent in summer, non-existent in winter. There’s no minter. More coins tend to leave the keep than enter, and it’s been this way for a century.

So the keep has an alternative official currency. I’m thinking hardened clay blocks, like mahjong tiles. There’s red, grey and yellow clay in the area.

The clay gets packed into metal frames, smoothed out and stamped with a large metal brand. Then the frames go into the forge until rock hard.

Then Chaos Keep wizards cast Arcane Mark on the cooled tablets. And then the tablets are carefully cut into coin tiles.

Wizards can use Detect Magic to authenticate counterfeit tiles at any time. Getting caught with a counterfeit tile is subject to punishment. Priests will use their divine powers to trace the currency back to the counterfeiters (when possible).

Counterfeiters are polymorphed into slimes.

In truth, it’s hard to catch counterfeiters, it’s more the threat of magical detection and divination that keeps fake money mostly out of the system. And magic is mysterious and feared in Chaos Keep (it’s a grittier type setting).

What do you think?