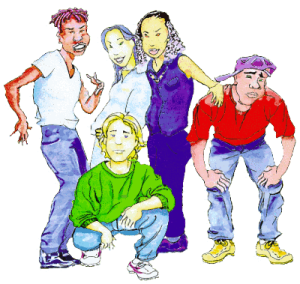 I’m always amazed by the way some games last years when no one in the game is having any fun. There is something mystical about having a regular game that is comforting and the hassles of finding and integrating into a new gaming group is a daunting task.

It is very similar to couples that date one another simply because it is familiar and the alternative is too scary.  I can personally say that I’ve been guilty of staying with a gaming group too long.

The alternative is not scary.  Just like you need to dump a relationship that is not working out for you so that you can find true happiness, one must dump the old gaming group if things are not what they used to be.

The Game master is NOT always right

One of the trusty sayings about the rights of game masters, “the GM is always right” has been perverted to the extreme. Instead of a rule that is supposed to expedite the game, keep things moving, and/or settle disputes among players, power-hungry individuals wanting to exert control over his fellows often use this rule.  Poor treatment of others cannot be excused by a simple rule.

A GM must be Fair, Equal, and Even.

Even – This might be the most important and difficult for GMs.  A

GM must make it very clear when the rules are being enforced and exact the rewards and penalties immediately for the prescribed behaviors.  Letting something slide one time and not the next is not fair or equal treatment for the players.

GMs not following these three simple rules should be on notice.  You’re about to

The same thing goes for gaming groups.  Players are the most important part of the equation.  I cannot tell you how many times I would have loved to run a game but lacked sufficient players for [insert obscure game title here].  In spite of their position, GMs are not as important as everyone grants them to be. GMs are wise to deal with this fact and know what is going on with their players.

Are the players happy?  Do they like the campaign?  What could you do to make it more fun for the players?  Ask questions.  Listen to the answers and take them to make your game stronger.  When you get the answers, don’t be defensive.  Be clinical and take notes.

GMs not asking these questions will have no idea if their players will be coming back for the next session.

Some GMs view their position as adversarial to the players.  Many players, in turn, view the GM as their adversary.  A game night should never end with one side of the GM’s screen feeling like they’ve lost the match.

GMs need to understand that their role is a personal challenge, struggled with within.  The goal is not to create a body count of player characters, but to create the fullest and richest imaginary world you can devise.  Like a chess player, you must anticipate and map out the actions of the players with branches upon branches of events.

When this fails, you are challenged to expand upon your world on-the-fly, keeping ahead of the players as they interact with your creations.

The GM’s ultimate reward is seeing the characters grow and be challenged, with the players coming back session after session.

After running through a scenario, if your GM says, “Darn, I should have had you,” versus, “Well done, I didn’t think of that,” be wary.

Players need to recognize the signs of good and bad GMs.  They must make their minds up whether a game is worth their time and/or their frustration or to move on.  If the game is worth sticking to, having a quiet personal talk with your GM with your concerns should be in order.  The GM’s response should let you know if you’re wasting your time or not.

When it is time to leave, try to leave quietly, with your contact information available to the other players.  They’ll want to know why you stopped coming to games.

Try this: “I was no longer having fun with the game.  I discussed my concerns with the

GM and felt it was time to leave.” One should feel free to share this article with your fellow players.  Who knows, you might be able to find a new GM and move all your players to a new game.

Looking for love in all the wrong places

Joining a new gaming group is very hard.  The best thing to do is be flexible.  There is no right way to role-play.  Some groups might be really intense about the in-character portrayals with character voices and costumes.  Some groups may be very relaxed.

The next part is to know what type of player you are yourself.  Are you a rules-lawyer?

Do you have “all the books” or just a basic player?  Are you a social gamer or one that is there just for the game?

The only way to know if a group is for you is to make contact and sit in on a session or two.  Never build a character right away and jump in or you might be entering into another group you’re not going to have fun with.

2. Is the game too heavy in role-playing or tactical combat for your tastes?  Can you take seriously the “hard-core” players in the group?

3. Are the group members personable?  Would you go to the movies with the group?

Would you share a pizza?  Would you invite them to your house?

Ask questions and make sure the group is interviewing you as well as you interview the group and GM.  A group not discriminating can pull in new members later on that you may disapprove of.

You’re planning on spending hours upon hours with these people.  Don’t be afraid to walk away.

There are many game groups out there

If you build it, they will come. If you simply cannot find a gaming group to join, you should seriously consider forming a group on your own.  In many cases, there are a pool of gamers and GMs in your area also looking for a group.

In most cases, the Internet will be your best starting point.  Many online sources list local groups and/or players by location.  Start an online community/club/group to organize and advertise your group.

Post a flyer at your local game shop.  It is in their best interest to keep gamers gaming, so they should not have a problem with that.

Once you have a selection of gaming group candidates, everyone should meet somewhere neutral and have drinks, dinner, or have some non-gaming event to have everyone in one room to make sure there are not any clashing personalities.

Again, you’re going to be spending a great deal of time with these people.  Select one or two candidates to join your group and then get them involved in assisting you to build the group.  You will have a great group in no time as the work in building the group compounds with new members.

Gaming is supposed to be an enjoyable experience.  If it isn’t, it is time for some changes.