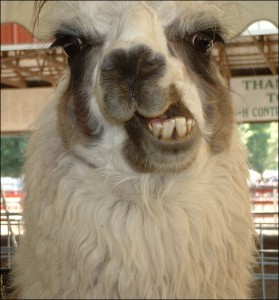 We start the second half of February with an interview from Mike, a Gm of 25 years, who has lots of creativity, and adores llamas.

Ya hey der. My name Mike Lindstrom and I am the proud webmaster of the creative role playing resource site Strolen’s Citadel.

I first GM’ed probably around 1986ish. Small time and we were super young but was hooked ever since. Had the opportunity to be around a lot of great DMs so we often traded roles fairly frequently.

I am just as happy to play as to GM. Palladium is my game of choice! Maybe because it was my first system I really got to know but how can you not love the chance to parry…and fumble. I always disliked the THAC0 style where you just watched yourself get pummelled. More die rolling…but more suspense when you are parrying against a Nat 20!

I also did a few years of running a PBeM when I was out of local role players. Remnants of that can be found online still as “The Land of Aros.” The need for a creative outlet is what created Strolen’s Citadel. No gaming group and the need for doing something related to gaming, heck, let’s put together something to share all our role playing ideas!

What would you like to improve about your GMing right now?

Right now? Definitely getting into gaming again! Without too much detail I am in the AF stationed overseas and have been moving every 4 years for the past 16+ years. It is often hard to get a stable game going with the duty requirements and the change of location.

My first two tours I was fortunate and, by blind luck, my shop was filled with role players. I remember helping a person move in and spotting the Dungeon Master’s Manual, “AH HA!” A new GM!

Now, however, my position and the small size of my location really doesn’t allow me the freedom to game like I used to.  I spend most of my “gaming” time trying to make strolen.com a more useful resource.

We used to be monthly and any other time we could sneak together. The 90’s game group had a dedicated room, dry erase board, music in the background (usually non-vocal type stuff like the sound of whales – which is actually quite eerie).

We would freshly brew large pots of aggressively sugared Earl Grey tea and copious amounts of Big Red. We would get together after work on a Friday and go till we got stupid. We always used miniatures and had a dry erase graphed mat that would be used the entire night. Paper towels full of dry erase marker mess would be all over and bags of chips are visuals I still have.

In the last years we would move from house to house, no stable place, but when we prepared the room you would think we were holding a business conference with all the stuff we lugged.

At first just to try it. We started playing modules and I remember not liking being taken out of the story/action by the GM having to read stock script or always referring to it to figure out what/where/how we were doing something.

I started GMing because I had a world I wanted people to be part of. The game flowed much better when you had a rough outline, a decent idea of the world you were in and had the freedom to just wing it when it was appropriate. Once that started, I never went back to modules.

I would say over 90%+ our own stuff.  I have, like many, binders full of notes, adventures and characters that I can never bring myself to dispose of. Even the dog pee stained old maps of our first world are still delicately preserved (and thankfully don’t smell).

While there are a TON of great published materials, I find it much more time intensive and difficult to get involved in somebody else’s world rather than using my own ideas. I may snag tid bits from them for a session but I would never actually use a full module and play it through.

Now that strolen.com is so full of inspiration from a bunch of super talented writers, I see the need for modules to be even more unnecessary.

A week or two prior I would have my idea of where I wanted the session/campaign to go and would talk about it very briefly with the players. We would require a couple pages of back story on each character to include their relationship and how they knew each other in character.

If somebody wanted to be met “on the road” we could discuss how they would want to work that. I find that the most important part is to get a good cast of characters with some good back story that they have ownership of (each character needs a secret, a weakness, a strength, some hooks etc).

Everybody would read each other’s background and I would incorporate as much of that as I could into the plan…then try to keep track of it all as we went.

Magic User: He almost always played a character that was able to use magic. He couldn’t understand why others didn’t see how important and fun it was. Was always thoughtful about things and loved to have unusual spells and use them creatively.

Comedian: He could do almost any accent and could go from child to old Scottish grandpa. Many times a person like this in the group can get way out of hand but he always kept a perfect balance. Never played the same thing either, always trying the odd characters that made it fun and challenging to run.

Thief/Rogue/Ranger: Waivered from trustworthy to a regular back-stabber amongst the group. Another one that brought a great amount of conflict to the group that I could grab and use to my advantage. He made it challenging for other players to stay in character as they knew he (his character) would do something selfish and cause trouble for the group.

Trophy horder: and when the trophy was taken from him, burned the character sheet in the sink because he was so mad.

Omniscient: Others that were new and had major difficulty staying in character. Whenever something happened and they weren’t there they still tried to ask/do/grab/etc before the person that *is* there could.

Our style was always pretty loose. We loved the Nat 20 rolls and had charts out the kazoo for when they came up. Nat 1 fumbles were also a favourite. We had no problem spending 2 hours in the town working on our inventory, using skills to make some cash and generally just wasting time.

We loved to game and used it as an excuse to hang out together and enjoy each other’s company. Nobody ever cared if we spent 8 hours and all we had to show for it was some rope and candles. It was all about the companionship.

Creativity. It is super boring when all you get is “I attack the orc” type replies. The games turn into rolling dice in the style of a motorized arm going up and down hacking orcs. When the players can articulate some action their character performs and make it like a movie with flips and rolls and all that silliness, it makes for a much more fun game.  Plus the things they say or ideas they express about what is happening is awesome fodder for future use.

I would say I let the players and characters dictate what happens. I may have a loose plan on encounters and such but often find the characters backgrounds, interactions and the players own thoughts help guide the adventure more than anything.

If I thought they would find the evil duke because of the clues I gave them but they understood them to mean find a toothpick of power and use it on a kraken….heck, why not? Why “fix” their mistakes. When you look at it, fighting a kraken with a toothpick is MUCH more fun than getting an evil duke!

I think involving the players directly into the process of making the game. It can probably be great to run purchased scenarios and such but it tends to feel like a checklist you are going through.

If the players wanted to do something else then you either had to throw out the supplement or railroad them into continuing. That is an instant turn off for many. It can almost turn into an “OK, what do we do next GM” and they take a guided tour of adventure.

It may not be that bad in many cases but for our groups, we were so out of the ordinary that we would never get the module correct and would ruin it somehow…hard to “wing it” when trying to play a module as your improv may ruin something else farther along. So I would say, listen to your players and use their creativity and thoughts against them!

I really like Flying Buffalo Inc. Stuff like the Citybook series. It is the kind of inspiration that strolen.com has and matches my needs as a GM the best. Generic, quality descriptions with the perfect amount information, maps as needed and scenario suggestions to use with it. Love it.

Biased question for me. Strolen’s has been my home for a very many years and I guess I find myself spending most of my time there for obvious reason. I like escapistmagazine.com,  campaignmastery.com and of course I am subscribed to roleplayingtips.com!

I think I have some trouble giving everyone equal timeshare and importance in the game sometimes. There are the dominant personalities that sometimes take over the show and because it is fun we all run with it.

Then, in hindsight, I realize that Magician has just been hanging out with us and not really active…sort of like in the movie The Gamers where the player only shows up and is remembered when you need him.