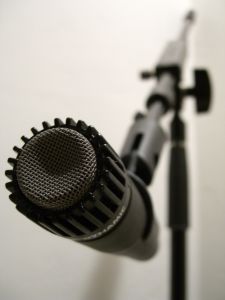 Today we chat with a busy father who seems to find time for gaming bycomboing day care with RPG. Beware his eyebrows.

My name is Randy Harris (my mom calls me Randall and I’m Ronin_Randy on the internets). I currently reside in Manhattan, Kansas where I’m a web troubleshooter by day, an earner of dad experience points by night (I’m around level 3, about to hit 4) and a master of dungeons every other weekend.

You can follow me on Twitter and I occasionally post to my blog when I’ve got something to say. I’m not an avid blogger, nor is my blog gaming-focused, but I’m working on a plan to change that.

My favourite games to run are D&D 4E, AD&D 2E, Dark Heresy, 7th Sea, Legend of the Five Rings (2E preferably, but the new edition is intriguing), and Serenity. My love affair with all things White Wolf ended in 2004 when I realized that all of the punk was being forcibly removed from the gothic-punk milieu. I’ve run some game or another since middle school, and I logged my 20th year as the guy behind the screen in November of 2010.

Re-learning how to GM tabletop games has taken a lot longer than I’d anticipated. I ran a Vampire: The Masquerade LARP for eight years with 50 players at our peak. Going from a giant sandbox where you mostly referee and direct traffic back to the “small stage” with 5 people and a compelling, personalized story for each is taking some getting used to.

I find myself making mistakes like forgetting to make notes when I improvise (players call you on those details, you know) and slipping accents and mannerisms when jumping from NPC to NPC. I keep telling myself it’s like riding a bike, but it can be frustrating at times. As an aside, I really suck at endings (a problem that stems from years of games that died too soon due to circumstances beyond anyone’s control).

I’m a minimalist when it comes to my games. I have a giant battlemat, some markers, counters left over from my CCG days, a screen that I lay flat most of the time, and a modest collection of miniatures (they all fit in a shoebox-sized Sterilite container). I like to make sure the group is in a circle of some kind, preferably around a table if we need to use the battlemat. When I run games that don’t need the mat or a map, I’ll set up in a corner and walk around the room while we play.

Since most of my group have aspiring gamers of their own, we’ve taken to playing at Annette’s. Her apartment is bigger and has a living room we can gate the babies and the spouses into. She’s also the proud owner of an awesome, heavy rectangular table (the kind that doesn’t shift much when bumped) with a handy light fixture right above it. We keep finding that the babies want to see what we’re doing, so I’ll sometimes accessorize with a kid on my hip or asleep in my arms. My poor Ogre Pulverizer miniatures suffer from chewed club syndrome if we aren’t vigilant. I don’t know what it is about those bid, dumb oafs that makes their clubs so chewy.

I played a lot of Battletech, Star Trek Battles, Star Frontiers and AD&D Second Edition in middle school, and developed the dubious reputation of “Guy who reads the books” (the nicest way of calling someone a rules lawyer I’ve experienced to date). Every now and then, I’d run something for my cousins (or my mom and aunt), but I didn’t start GMing seriously until our regular DM’s dad got a new job. Living four hours away pretty much spells the end when your group’s oldest member won’t be driving for another two years. I took up the mantle, ran everyone through Shadowdale, Tantras and Waterdeep, and never looked back.

Unabashed idea thievery is my claim to fame. I’ll use just about anything (the hometown in my current campaign is named after the fire extinguisher hanging in my kitchen), but rarely in the manner it was written or intended. I suppose repurposing would be a good word for what I do. I’m currently kit-bashing the sample adventure in the Dark Heresy book, Disciples of the Dark Gods, into 4E so I can use it in a couple of levels. 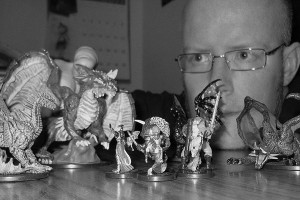 I start by getting the kids off to bed and finishing up chores around the house, then I start reading, listening to music or watching random videos. While inspirational stuff is going on around me, I try to stay focused on how whatever cool thing could be incorporated into my game. I take some notes, re-skin as necessary, print off whatever I need, and then try and get some good sleep. Time permitting, I look over it again later and revise if necessary.

Justin is the guy who reads the books. He plays defenders or leaders and keeps the party alive while keeping me honest. Building powerful characters as expressions of his concept is his usual modus operandi. He’s usually the group tactician and the party’s caller in combat.

Mike is my boss at work. He’s a giant in real life (7’3” and 29 stone) and he likes to play characters of similar stature. He gets the biggest weapon possible and hits with it as hard as possible (unfortunately, not as often as possible). He’s usually the morally-ambiguous conscience of the group and likes to point toward whatever path spells the most trouble.

Danni really wants to take Mike’s instigator crown, but her self-and-coin-preservation instincts are too strong. She’d be that old-school rogue in OD&D your father warned you about. She’s an expert at WoW, an attribute that alternates between distracting and tactically useful.

Alicia is one of my oldest and dearest friends, and I’m really hard-pressed to remember the last time I ran a game without her. She’s a roleplayer, tried and true, and getting her to specialize is like pulling teeth. Still, once she’s found her character’s stride, her ability to keep everyone in-character and on task are amazing.

Annette is a nursing school student, so the five hours she spends gaming with us are pretty much the only free ones she’s got. I maintain her character and keep her posted on events and discussions outside the game, and she shows up and has fun. It’s extra work, but hey, free plot-hammer when I need one.

We’re currently using D&D 4E as an excuse to socialize, let the kids play together, and take a break from the real world for a spell. I’d like to say we’re a serious bunch, but the current campaign features a wizard (Annette) and her grogs (ala Ars Magica) attending Hogwarts and coping with challenges that are equal parts Glee episode and 80’s fantasy movie (or fantasy metal music video) with nods to Galaxy High and British comedy (and a Very Potter Musical). We have fun, and I think that’s what really matters to everyone.

I’m collaborative and permission-giving. My games are usually shared storytelling exercises, as I’ve found that players are more invested in what’s going on if they’ve had some say in things (and they’re less likely to rob the barkeep if I made one of them name him and another one tell me something that’s different about him). I have a destination in mind, and the steps that I plan usually involve moving toward that destination or learning more about it, but the journey is the part I find the players valuing the most.

I can make everyone at the table feel like their contribution is important while keeping any one of them from completely hogging the spotlight. I’d tell anyone that wants to get better at that to be generous with praise, open to player ideas (even the bad ones) and honest with someone that’s making a bad choice in or out of character.

Develop your encouraging and discouraging non-verbals (the eyebrow raise, adjustments in posture, vocal inflection) and use those in place of words where you can. A “good job guys” will get old after the first few times, but players will learn to look for the “ORLY?” eyebrow and listen for the “You just quartered this monster’s hp” grunt.

The Legend of the Five Rings GM’s Survival guide is amazing, even if you never run a samurai-themed game. I still find myself re-reading the Revised Storyteller’s Handbook for Vampire: The Masquerade. Both books contain essays and examples from GMs and designers that really love running games.

I read Roleplaying Tips and Campaign Mastery religiously.  NeoGrognard is a genius. At-Will and NewbieDM’s Blog have some pretty amazing stuff on them. Webcomics like Gaming Guardians, Red String, Order of the Stick, Looking for Group, and ErfWorld are good for learning what and what not to do with plot arcs and character development (and Gaming Guardians has an amazing fan community, just ask Wargolem). I also follow interesting people on Twitter (too many to list).

My main goal after this introspection is to figure out how to codify what I do and how I have fun doing it so I can do a better job of sharing that with others. GMing never seems like work to me, and I think that’s why I keep doing it.