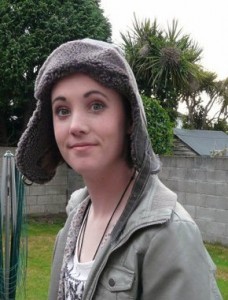 This week we interview Rebecca, a fan of D&D 4th edition from Ireland, a lover of Forgotten Realms and enjoy’s creating her own story arcs.

Hey, I’m Rebecca Maguire. From Ireland, studying to be an English teacher.

Do you have a blog, website or campaign wiki? http://www.sites.google.com/site/forgottenrealmsdnd

It is currently under construction. I’m not sure when it’ll be ready.

Dungeons and Dragons 4th Edition. I tried to run a 3.5 game, but I found it really difficult as I don’t have any of the books and I don’t like using PDFs much.

I wanted to get back into role-playing – I did a lot of it when I was younger. I didn’t know of any games in the area, so I set one up with my friends. No-one else was going to GM, so I stepped up to the plate.

GMing has vastly changed my way of life. Every time I read a book, watch a movie or walk down the street I’m mentally collecting NPCs, plot hooks and quests. I spend hours each day trying to flesh out the campaign and create back-up NPCs.

We game every Saturday, from about 1pm to anything up to 3am. It all depends on how much energy we all have.

Where do you play?

We usually use the granite table out in my conservatory because it’s out of my mom’s way. The table just about fits the eight of us.

I use about half-and-half. I am in college so I don’t have the time to do everything by myself, so I use the Forgotten Realms as a setting, and mostly the quests and stories are all out of my head.

What non-digital and electronic GM aides do you use (other than books)?

So far, it’s just been me and the books or PDFs, pen and paper. We do use Facebook for organising sessions, though.

We use mostly Lord of the Rings minis on gridded whiteboards covered with a sheet of acetate. Largely we use them for trawling through dungeons and during combat.

Right now I’m grappling with a number of issues. My biggest issue is probably keeping everyone absorbed. I’ve banned laptops, etc. from the table, and I’m working on having something interesting happening all the time.

I have only been a player for one session, when one of my players took over for a couple of weeks while I did my exams. It hammered the realisation home that describing everything in detail doesn’t distract the players from role-playing, but enhances the experience. It seems really obvious now….

Everybody gets into character and stays there. The dungeon is eerie and creepy and everyone is tense and full of anticipation. The battle with the Big Bad is long and dangerous, with everyone honestly wondering if their character will die. In the end the relief of success (or the sorrow of failure) is palpable, and everyone is buzzing and excited for the next game.

Players have to be willing to role-play. For me, the story is the most important thing in the game, so my players need to think so too. Beyond that, I look for enthusiasm.

Largely, the group is after a good story and tries to consider everything from their characters’ views. They try to look after every NPC, even if they’re really annoying and they don’t like them.

I’m a story-teller and an actor. I try to make the world as realistic as possible, even if it means putting on silly voices or doing sound-effects.

I pride myself on being able to come up with stuff off-the-cuff, as my players never ever do what I expect.

I would say have a good knowledge of the surrounding area, and have a list of random ideas of things that could be there.

Above all: practice. Your players will forgive a quick break while you wrack your brains.

After each session I take detailed notes on what happened, and any conclusions the players have jumped to.

From there I decide on what could happen to further the campaign story, and then detail a few side quests to bulk it out a bit.

There is always a bit of pre-session planning, and even mid-session alterations to what I’ve already got.

I would like a programme for recording and filing NPCs and their opinions of the characters. Maybe somewhere you can get appropriate riddles and puzzles in one place – it takes ages to find good ones.

I’d like to learn how to describe what’s happening in combat while we fight. So far I’m finding it really hard to do.