How To Reduce Combat - Roleplaying Tips
3

How To Reduce Combat

By Mark of the Pixie 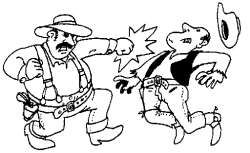 If you want less combat, try these tricks.

PCs can only fight if there are people or things to fight. I know a few GMs who throw in monsters as a delaying tactic, to slow the game down. Don’t do this if you want to reduce combat.

Killing the guards at the door requires exactly the same number of rolls from the party as sneaking past them, and gets exactly as much screen time.
This greatly reduces the emphasis on combat. It is also much faster.

Is beating up some random guards in a round by round fashion that important to the story? Go to full combat for important fights, but also go to “combat-style skill-checks” for important non-combat tasks.

Defusing a nuclear bomb can be done as a series of lockpicking, demolitions, science, and hacking rolls much the same as combat. Can you penetrate the defences (hit it) enough (to get to 0 hit point) to stop it before it goes boom (killing you). It can be just as thrilling and intense as combat.

3) Provide other options and show NPCs using these new options

If you want a new behaviour, you need to show them what you mean. Have an NPC surrender before combat and start negotiating. Have them escort a diplomat, who shows them some tricks.

For example, avoid bleeding, festering wounds, and so on. These things are fine if they are what you want, but they do not reduce combat. They make it faster and bloodier. It may take less time, but it becomes more of a focus.

I have players who still laugh about a session I ran ten years ago when they cooked a meal. No combat, but lots of laughs and in character roleplay, plenty of skill checks, even a divine intervention. You don’t need combat to have fun. Look for ways to tease out the fun in mundane or new situations.

There are a few things I would die for. Not many. But damn, they are important to me. Any fight where an NPC is going to die at a PC’s sword – that NPC had better damn well believe in what they are doing.

A gaunt lion who will starve if they don’t kill soon, one who growls with hunger and drools at the smell of blood, is going to make combat a lot more intense than a generic 4HD lion.

A guard who begs for mercy while still defending himself or one who stands on honor and says, “you shall not pass lest it be through my blood” are both better than a 2nd level fighter.

Just ask, why is this NPC willing to die here? If you can’t answer it, drop the combat. Then once you have your reason, show it to the PCs.

The guy might be trying to kill a PC because the PC killed his sister. He doesn’t need to say that up front, but his passion and hatred should be clear. By making combat more intense, you make it mean more to the PCs and that makes it more satisfying. That means you don’t need as much to get your fix.