How to Think Faster On Your Feet While You GM 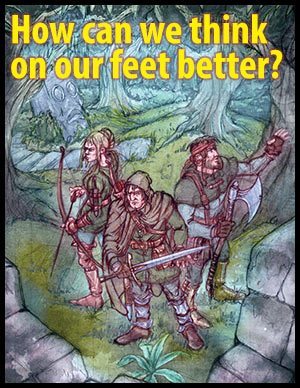 A couple weeks ago I sent out a Reader Tip Request for the spouse of a GM in need. The game master was having problems reacting to in-game events. He needed to think faster – or different – on his feet so he could handle unexpected player decisions and actions better.

Hello! I’ve been subscribed to your tips for awhile now and I’ve enjoyed them and found them useful. I don’t have much experience GMing myself, but my husband has GMed for years. The only problem is, due to a brain tumor and other brain trauma, he doesn’t think as fast anymore.

Trying Something Different to Get You These Tips Faster

This Reader Tips Request generated a huge response. Over 100 emails! Thanks so much to everyone who wrote in with their thoughts, ideas and advice. Roleplaying Tips readers are such a smart and generous group.

The overwhelming response became just that. I was unable to use my usual way of doing things, which is to collect all the tips into an article or free ebook.

I try to edit, condense and piece everything together into a single narrative so everyone benefits from each others’ ideas.

With 100 emails and thousands of words to work through, edit and combine into something cohesive though, I was paralyzed.

It was truly overwhelming based on the free time I have available.

Then Andrew Quee emailed me with a brilliant suggestion: blog it. (D’oh. Why didn’t I think of that!?)

So that’s what I’m going to do. I’ll post the initial Reader Tip Request, and then in the Comments section below paste in each reply.

That way, everyone benefits from the tips, I can publish the tips faster, and most importantly, the reader who made the request can evaluate the responses sooner than waiting weeks for me to process everything in detail.

I will make responses anonymous (name abbreviated and no email address posted) in case readers do not want to be identified. We can all use the comment reply button to hold a conversation and give feedback or post more ideas.

Thanks again to everyone who responded! And thanks to your great suggestion, Andrew.

To all, I hope the following tips contain a nugget or two for your own GMing.

He’s tried GMing again and he just can’t keep good control of the party. He says he has to plan out every possible avenue players may take in detail beforehand because he can’t think on his feet well enough (and that would take a long time).

It’s either that or he has to shoehorn the party and make the story too linear (which most parties won’t like and many will try to break it without even knowing what they’re doing).

He designs his own adventures. He has difficulty figuring out what happens after each encounter.

But the biggest problem is keeping players in line. Because it takes him a few extra moments to think about what happens next, the players tend to steamroll ahead before he’s ready (which causes him to have to rethink everything he has just come up with, which takes more time).

I play in his games and try to moderate when I can (I know what he looks like when he’s having a hard time) but it doesn’t always work out.

He’s just gotten so defeated that he feels like he can never GM again, and I want to show him that he can.

I was wondering if you or the community have any tips or tricks to try and help him? Thanks for your help.

Below are the responses I received by email. Lots of great advice in there! And feel free to add a tip of your own.