How Do You GM Great Droids? - Roleplaying Tips
5

How Do You GM Great Droids? 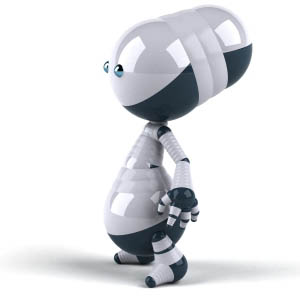 In RPT #512 RND(axe) asked for help on running interesting droids in his Star Wars game. I received the following two great responses:

When I run droids, I stay focused on their purpose.  Droids are tools, not characters (helps stop them outshining PCs).  It colours their outlook on everything.

If you want to make them comedic, you need only take this narrow perception to an extreme.  An example would be a repair droid who keeps trying to fix everything, including a PC’s poor pronunciation, or the captain’s failed marriage.

By keeping droids as tools, it allows PCs to use droids to do things and still have the PCs shine.  Apply the same to NPCs, and the assassin droids become just an extension of the villain.

Give Droids One Interesting Quirk

In the first Star Wars campaign I played in, the GM had a droid he called ML-58. My character, a Jedi Investigator, and the rest of the party were trapped on a space station, so we borrowed one of the docked starships to escape to the planet below.  ML, or “Mel” as we called him, happened to be on that ship.

Despite my continuing hatred of Mel, I think he proves a good example of an interesting droid character.  Whenever anything mechanical was left unattended near him, he would compulsively tinker with it. In this way, I was:

Give droids one interesting quirk and run with it.  Some examples I’ve used are:

Some famous examples of these are Marvin (the depressed robot from Hitchhiker’s Guide to the Galaxy), HK-47 (refers to non-droids as “Meatbags” and takes a bit too much pleasure in killing them), and even R2-D2 (who always has a new trick up his sleeve since we last saw him).

What about you? How do you GM great droids?