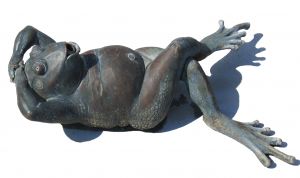 I agree with your epiphany that we should play more.

One way I am looking at to help facilitate this (as work, children, and other responsibilities reduce our time) is the logistics of how we play.

Most of my games are fortnightly three hour face-to-face table top sessions in the evenings with a regular team of players in campaigns that last several years.

I have also run a few monthly 20-70 player freeforms (or LARPs) similar in format to most Camarilla games, also over several years, but have stopped because of the work involved and the lack of player and co-GM support and interest.

There have been a few convention games, as well – single-sessions with pregenerated characters.

However, I am experimenting with other way of doing it.

One of my most successful tricks is the player pool. I have a roster of 10-16 players, each with a full character. Each game night some will turn up and some others won’t. I have nights with just 2 players and nights with 15, but most hover around 5 to 7 players.

I have to be flexible with which plots I run (and often have 2 to 3 in reserve), but the game is episodic enough that I am able to resolve each plot in one night.

Each character must have something else they are doing that explains any absence (one character is an academic and is occasionally be away at a conference, another often spends time with her family). Having these reasons means it never feels forced when a character is away, and they add depth to the world and the characters.

I also have some players guest star as regular NPCs. If the player is free, I work their NPC into the plot. Once or twice a year, I have a mini-freeform where I get 5 to 7 guest stars in to help me do a wedding or similar for the PCs.

An idea I am currently trying is running 3 interlinked tabletops monthly. Each has 5 to 7 players, and take place in the same world.

I will hold occasional BBQs or dinners where I invite everyone in-character to chat and socialise “at the tavern.”

They can swap adventures, pass on information, trade quests and info on NPCs, or warn each other about different threats. They can even break up teams and reform into new groups.

My hope is for a low commitment game with a lot of PC-to-PC social interaction possible, but still a neat tabletop format for quests and personal plots.

I would be interested to hear how others run their games.