Use These Mechanics To Roleplay More - Roleplaying Tips
3

Use These Mechanics To Roleplay More 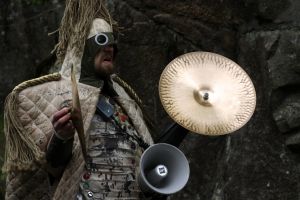 By Mark of the Pixie

“How do you use ROLL-playing to add to the fun of the ROLE-playing aspect of your game?”

Biggest aid I have for this is Passions.  I let each player pick a single Passion, such as “protect the innocent.”  When that passion is in play, such as when the PCs are trying to stop bad guys burning down an orphanage, the PC with the Passion gets a bonus to any one d20 roll per round (skill roll, attack or whatever).

The drawback of a Passion is if they are acting against it, then the bonus turns into a penalty.  For example, if they needed to shoot an innocent, their protect the innocent +1 would become a -1 to their roll.

To keep things fair I also give these to the villains. This not only keeps everything balanced, it also reminds me as GM do more roleplaying (it is all too easy to slip into the boring “he hits you” when you are running a multitude of enemies).  Villainous passions can be things like get rich, serve our leader and destroy all humans.

Fortune at the Start

I also use a “fortune at the start” method, which isn’t possible in all systems, but with my home-brew system you always make two rolls whatever you are doing: one for your action/attack and one for your reaction/defense. Once players have their rolls, they then decide which is which and what they are going to do with them.

The fortune system gives them a lot of freedom. For example, a player can choose to put the highest on their attack to represent their character being angry or aggressive.  Alternatively, they can put it on their reaction/defense if they’re feeling defensive.  If they were going to try something special, but they get a crap roll, they can choose not to waste their shot. Similarly, if they roll well, they look for something spectacular to do with it.

I also give good support/co-operation bonuses.  This helps foster teamwork, which leads into more interaction between PCs, which gives more fuel for roleplaying.

Easiest is to ramp up your own descriptions and provide lots of different environments with ready combat modifiers.  Repeated fights with orcs in empty rooms gets a bit dull after a while. Give the orcs nets and have them trying to capture – not kill – the party makes it different.

Have the fight occur on a ladder, or in turbid waist deep water. Have the bad guys use the environment to their advantage and show the PCs they can do the same.  Before running a fight, ensure there are at least two things the PCs could use in the environment to their advantage or that could be used against them. Maybe the wilderness encounter is in a field of blackberry bushes, which the goblins are using as cover and a sort of weak Entangle spell, but are highly flammable due to the drought.  Maybe the cave has many stalactites that can be used as cover, but also can be knocked so they fall on foes.

Another technique is to remove coincidence.  If you roll a random encounter with kobolds, it isn’t actually random.  Someone, somewhere, made it happen.  Maybe an old foe paid the kobolds to slow down the PCs, maybe the kobolds where paid to track the PCs but get discovered.  This turns what could have been a meaningless series of dice rolls into part of the story.