In the past two articles in this series, we have looked at modules B1 to B3, and B4 to B6, of the B-Series for Basic Dungeons and Dragons. Despite the 40 years of development that Dungeons and Dragons has seen so far, there is still plenty of inspiration for the modern gamer amongst the numerous adventures and supplements of the past. Now, we explore three more – B7 to B9 – and see how for many, this really was a golden age of Dungeons and Dragons.

History of the B-Series Modules

To recap, the B-Series of modules was first published in 1979 with the release of B1: In Search of the Unknown. The series itself would consist of 12 different modules, with the last being B12: Queen’s Harvest, which was published in 1989. The modules would focus on a series of introductory modules designed for use with Basic Dungeons and Dragons rules system. Initially, the series would be rather generic and feature the core Basic theme of dungeons. But later modules in the series would play with this established formula, and start to be placed within the iconic Known World setting of Dungeons and Dragons.

History of B7: Rahasia

Module B7: Rahasia (Tracy and Laura Hickman) was published by TSR in 1984. The module had previously been published in 1979 under the label of DayStar West Media, an independent company set up by the Hickmans. They would later sell of Rahasia and another adventure to TSR in 1982. It would also be around this time that Tracy Hickman would join the staff of TSR, and begin his legendary work with the company, most famously on the Dragonlance Chronicles.

History of B8: Journey to the Rock

Module B8: Journey to the Rock (Michael Malone) was published in 1984. This module would take a departure from the majority of the B-Series adventures. It was placed in the wilderness rather than a dungeon for the most part. However, this adventure was more like an outdoor dungeon than any of the “hex-crawls” that would usually feature in the X-Series adventure modules for the Expert D&D rule set.

History of B9: Castle Caldwell and Beyond

Module B9: Castle Caldwell and Beyond (Harry Nuckols) is a series of 5 short dungeon adventures that could be used together for a loose adventuring campaign. The first two would feature the titular Castle Caldwell, supposedly named after the cover artist (Clyde Caldwell). All five mini-adventures were part of an external submission to TSR, which was pretty rare at the time of publication, submitted in the format in which it was published. 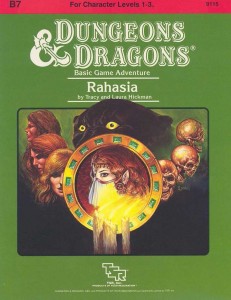 Module B7: Rahasia was a larger dungeon adventure that revolved around the PCs trying to help an elven maiden called Rahasia rescue her father and her betrothed, who have travelled to a nearby temple to rescue two other elven maidens kidnapped by a mysterious figure known only as the Rahib. The Rahib has managed to gain mental control the temple servants, the Siswa, as he sets about trying to kidnap Rahasia to fulfil the desires of his dark allies.

The adventure is mostly set within the temple complex containing a number of devious puzzles and traps to deal with, as well as a host of creatures to overcome. Despite the wealth and variety of obstacles the PCs get to face in the tower, none would be more infamous than the cunning teleporters featured prominently within the dungeon for a multitude of reasons.

Although the teleporters all function in the same way, they are used for three main purposes:

By using teleporters in these different ways, the adventure manages to get a lot of mileage from a small physical space. This is a trick that can be added to other adventure sites for the same benefits. 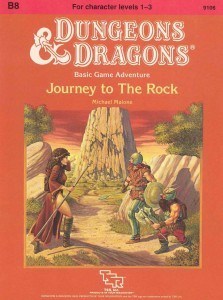 More Than Just From A to B

Module B8: Journey to the Rock would twist the idea of a dungeon adventure on its head. Instead of a dungeon adventure based on a single adventure site or two, it would feature a wilderness adventure with three main routes to follow. The arrangement for each route would be largely linear, maintaining some of the structure and direction commonly seen in dungeons, but expose them to other common issues featured in wilderness exploration.

Each route would feature a series of encounters that could be used similarly to the site-based approach of the standard dungeon. Quite a bit of emphasis would be given to the journey between such encounters, as the party follows their chosen route towards their ultimate destination – the fabled Rock. These encounters are rounded out by a number of optional “wandering monster” encounters that add a bit more variety to the journey.

This approach would be featured before in Module B5: Horror on the Hill, but unlike that module, the Rock doesn’t feature an extensive dungeon complex to explore upon reaching their destination. Rather, the journey itself is the adventure, and this module is ideal in demonstrating how journeys can be made much more interesting by linking up a series of encounters into an interesting storyline.

The encounters are not entirely self-contained, and many can be turned into a number of further adventures. Advice to place the module in the Known World is given, alongside connecting the adventures to several X-Series modules.

The module features rules from the Expert D&D Rulebook on dealing with wilderness adventures, including horses, wilderness travel, resting, and encounter distances, to simulate the more open environment the party will be travelling through. Although many modern systems now include such details as standard, this information can be seen as a reminder that a journey can often be an adventure in its own right, and needn’t be just a way to travel between adventure sites. 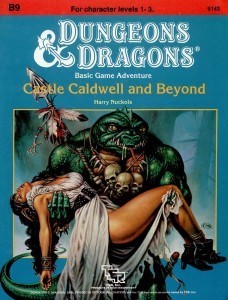 Module B9: Castle Caldwell and Beyond consists of five loosely connected dungeon-based mini-adventures:

The main inspiration for the module is it showcases how easily a collection of simple adventures can be linked together into a compelling campaign. Besides the first two modules, none of the adventures are inherently linked in any way besides a few background details, which can easily be adapted for the needs of the campaign.

The first two adventures are linked in that the entrance the the dungeons beneath Castle Caldwell are located behind a wizard-locked door within the first adventure. No way is given to open the door in the first adventure, leaving this room as an intriguing mystery. That mystery is then resolved in the second adventure, when their patron pays for a high level magic user to open the door.

The other three adventures all use a range of plot hooks to get the adventures started. The third sees them hired by the ruler of the kingdom, following the kidnapping of the princess, and this premise is used again in the final adventure, when the king once again hires the PCs for a mission, but this time at the behest of a lawful church.

The most unique plot hook comes in the fourth adventure – The Great Escape. The adventure sees the PCs start out captured and held within a prison camp of hostile forces, and their objective is to escape. Some advice for how to get the PCs into this situation is given. They can be hired by the king to perform a mission behind enemy lines that goes wrong, or they might be captured following an encounter.

By using simple ideas to connect a series of adventures, a campaign can be built up around the actions of the PCs. While it can be tempting to create an epic storyline for the campaign to follow, sometimes just playing a couple of adventures is all that is needed to get a good campaign going.

Looking back, we can take the following key points of inspiration from the B-Series modules:

At first glance, it may seem like a pointless task to look back at the modules for earlier editions of Dungeons and Dragons and see what can be gleaned from them. However, the majority of the content in such modules is still relevant for today’s game.

With inspiration showing us how to make the most of connections in our games, whether they are between dungeons, between encounters, or even between adventures, these modules all show just how easy it is to create a simple yet compelling campaign just by linking everything together.

Remember, you might not be able to teach an old dog new tricks, but you can certainly teach a new dog some old ones!