This month’s RPG Blog Carnival, hosted by Dice Monkey, is all about celebrating the RPG Blogging Community. What better way to do that than to celebrate the Roleplaying Tips community-created product 650 City Encounter Hooks and the associated City Encounter Hook Generator.

A Brief Word From Roleplaying Tips

In 2010, Roleplaying Tips celebrated 500 issues with a massive contest aimed at gathering 500 interesting city encounter hooks. Thanks to the creativity of RPT subscribers, we smashed that goal and received over 720 entries. After editing and removing some duplicate entries, we ended up with a final batch of 650.

This massive list of city encounter hooks was compiled into a free PDF, which was distributed for free to subscribers of the Roleplaying Tips Newsletter, many of whom had contributed to the contents. This freebie is still given out as free product to subscribers to this day.

In addition to the free PDF offering hundreds of ideas for urban campaigns and settings to keep PCs nervous, wary and excited, as they should be, Roleplaying Tips would offer even more value to the community – access to an online City Encounter Hook Generator, which contains all 650 of the encounter hooks supplied in the PDF.

This made the Roleplaying Tips Community City Encounter Hook Generator the ideal resource to inspire your plotting, or for instant inspiration during a game when the characters do something unexpected.

So, what sort of hooks does the Roleplaying Tips Community City Hook Generator create? Well, here are just 10 of the hooks generated by a single use of the generator.

As you can see, this sample contains a wide range of different hooks, each one just brimming in potential adventure for PCs who decide to follow them up. 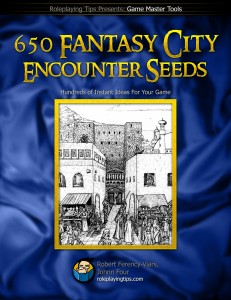 Thanks to all the Roleplaying Tips readers who sent in such great ideas!

We have more contests and community ebook compilations planned in the future. A game master can never have enough tools in his toolbox, right?

Right now, fantasy urban campaigns are Johnn’s favourite setting. He just concluded his two year Riddleport city game with an epic finish. Now he’s planning another city setting. There are just so many gameplay opportunities. You get faction play, intrigue, politics, and a ton of NPCs. You can also add in dungeon and wilderness encounters anytime.

The Roleplaying Tips newsletter continues to help game masters have more fun at every game. You can receive the tips at no cost at the website. You will also be able to enter future contests and make tip requests to specifically help your game.

Johnn has written three other books perfect for GMs running city adventures. These do more than give you bullet lists of ideas. They actually teach you how to become a better GM by providing specific GM advice, how-to’s and tutorials. If you can master the design of memorable urban NPCs, iconic civic holidays, and classic inns, taverns, and restaurants, you will have the tools at your beck and call to create great city gaming.

Lists of ideas are good in a pinch, but once you learn how to design key game elements, you will have full control to bring your campaigns to life. It won’t matter if you are planning alone or if you are at the table in the heat of a session, your new design skills will give you the tools to create and run excellent city encounters.

These books get into the nitty gritty details about all aspects of their topic. No vague information here. These are complete and detailed design manuals. Master this design advice to achieve new control over your gaming

Subscribe to the newsletter and become part of the massive Roleplaying Tips Community today (and get your copy of the 650 Fantasy City Encounter Hooks PDF as a bonus).