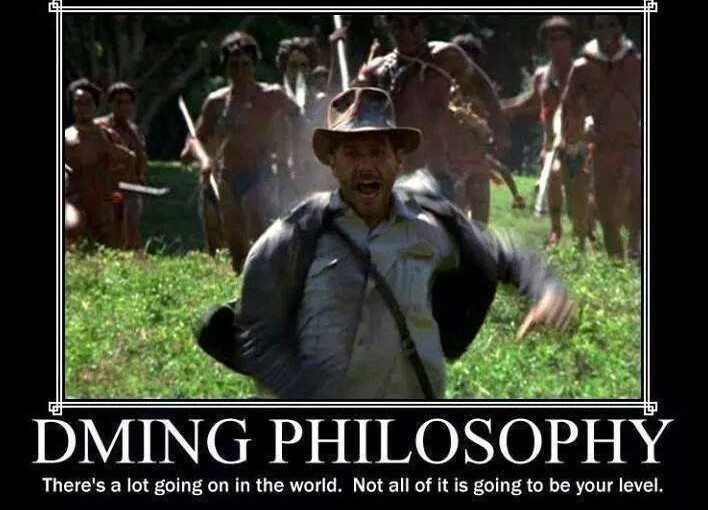 Did you know the Adventure Building Workshop includes exclusive interviews with top industry designers? I’ll be interrogating them to learn their adventure building secrets.

Last week I interviewed Monte Cook of D&D, Numenera, and Cypher System fame. He talked for almost an hour on adventure design, and that interview is recorded and ready for workshop members right now in the private forum.

Tuesday I put Dan Hass to the question. He’s published over a dozen 5E adventures and is still going strong.

And next week I interview Greg Vaughan. He wrote the massive Slumbering Tsar adventure path, and does work for Paizo and Frog God Games.

Plus, I have a few more interviews up my sleeve for the workshop this summer.

The Adventure Building Workshop kicks off soon. And the special 50% launch price goes away Friday, unfortunately.

For half the price of a healing potion, you get the entire workshop, plus a copy of the adventure I’m building, plus all the designer interviews with industry pros to help you create awesome adventures for your group.

RPT columnist Christopher Sniezak is part of a Kickstarter for the FATE RPG that wraps up soon.

In Part-Time Gods, you play new gods in the modern world. The Source, theorized to be the creator of all things in the universe, now struggles in its cage and tries to free itself. This has leaked energy into our world, spawning hundreds of new gods and even more monsters (called Outsiders) who are out for god blood. All of this, while you also attempt to maintain your normal life. Dealing too deep into your godhood forces you to cut ties with your human side, but clinging too closely limits your growth. It is a hard choice, but one every god must make.

I played session one of the new Colliding Worlds campaign a player has kicked up for us over the summer while I’m taking a break.

My PC is a 9th level warlock (D&D 5E). His world was beset by demons, and Aderoth joined the resistance movement to push the demons back to their plane.

However, a catastrophe transported him, an entire castle and nearby lands, and many of his people to a strange place where beings from other planes suffered the same fate.

With the rebel leader slain in battle, Aderoth is now leader of his trapped kinsmen. So he and his trusted XO travelled to the other factions to meet with their leaders to join forces and figure out how to get everyone home again.

The other leaders would be the other PCs. We met and formed a group. One player made a PC who didn’t want to join and was anti-social. I’ve never understood why you’d create a character like that. It cost us extra time and energy as we went out of our way to bring the PC into the party so the adventure could continue.

Other than that hiccup, the session was great fun.

It turns out Aderoth can speak with dead at will. I emailed Mike the GM after the game and asked him how this warlock ability worked. After some discussions, we nailed down the parameters and some outlier cases.

The upshot is Aderoth now has the skull of his evil mentor chained to his belt. Aderoth can speak with the skull anytime using his ability. Should be some good roleplaying a-head! (Groan.)

Have a great, game-full week!

Combat Parley: It’s All in the Delivery

Do you struggle to make it clear the party doesn’t have to fight to win? As GM, it’s all in your delivery. The right words said the right way get your party thinking about their non-combat options rather than just mindlessly rolling initiative every time the bad guys show up.

So how do you narrate the party’s options with clarity and drama? How do you delight players with meaningful choices in the tension-filled earliest moments of conflict? You’re about to learn how with today’s tips.

Start with identifying and understanding who the NPCs in each combat are. Similar to Combat Profiling as taught in Faster Combat, answer these two questions about the NPCs in every encounter:

As great GMs, we work hard to understand PC motivations. Give the same effort for your NPCs. Your villains and monsters must feel more alive, and must value things other than beating the tar out of your party. Make your NPC stories as real as PC stories.

Identify your NPCs’ most burning desire and most crushing weakness. Keep the motivation and weakness short, specific, and immediate. Use one or two sentences maximum. This helps you focus on and keep consistency NPC behavior and decision-making in the encounter.

For example, the party encounters bandits a few miles south of town. Are they just random, throwaway NPCs? No, because you’ve already answered the two questions above:

Now take a moment to identify all the different ways an encounter might unfold. Think beyond the default assumption of combat. Base non-combat solutions on NPC motivations and weaknesses. Similar to directors who include alternate movie endings, you identify alternate encounter resolutions.

Building off last month’s article in RPT#657: How to Create Great Non-Combat Encounters, choose one or two non-combat encounter resolutions from the list below.

The top two options are discussed in detail throughout last month’s article. Use these as your go-to non-combat solutions if you’re struggling to fit in any of the other options for a given encounter.

Your goal in this step is to practice seeing beyond combat as the only solution to conflict. Integrate this thought process with NPC motivations and weaknesses as discussed in the first step. With practice, you begin to see all sorts of options and story paths open up.

For example, if what the bandits want most is food and not to fight (because they’re terrible in combat), the “Force Surrender” non-combat option is a good encounter solution for the PCs.

But what if the party doesn’t think of or realize this? How do they know it’s a good choice?

They know because of the NPC motivation and weakness clues you provide the party.

Which brings us right to the final step.

Now you’re ready to give your NPCs a voice while delivering clear options instead of combat. You need to deliver clues to non-combat encounter solutions through a combination of language and body language. Your words, voice pitch and pace, and body language must convey the emotions of and communicate the clues to a specific non-combat resolution. This is how you achieve the best delivery possible.

Ever get frustrated with your group because they don’t notice “subtle” clues? Players aren’t mind readers, so when in doubt, be clear. Also use more emotional, descriptive, or extreme versions of words in your delivery. While I’m not a huge adverb fan, they do have a place in the context of tabletop RPGs and GM narration.

Vary your sound as GM when voicing NPCs. As we’ve learned, they all want and fear different things. Make sure those emotions come through when connecting non-combat solutions to encounters.

For example, a frightened group of bandits might all stutter when they tell the PCs to turn over their valuables. Make sure you adjust your voice pitch and stutter when you talk as the bandits. Or a villain the party has finally caught up to is confident the party can’t hurt him. Translate this into arrogance through your voice by speaking louder and slower – all while sitting back with a wicked grin.

Which brings us to….

Showing emotion through body language and facial expressions is a universal form of communication – and a powerful GM tool when communicating NPC attitudes and potential non-combat options. Six of the most common emotions we portray every day are anger, disgust, fear, happiness, sadness, and surprise.

Practice the facial expressions and body language that accompany these six universal emotions and start adding others you expect to use often for NPCs in your games (confidence, arrogance, etc.) to your repertoire.

For example, practice narrowing your eyes, waving your arms or shaking your head emphatically for angry NPCs. Get wide-eyed, glance around, and fidget for fearful NPCs. Remember, these are important clues in your delivery as to what the NPCs want or don’t want. They suggest different ways to deal with the situation besides a fight.

One way to build toward the best encounter-start delivery is to examine and connect an NPC’s one motivation, one weakness, and the one or two non-combat solutions you’ve identified. Take those and imagine how a TV or movie narrator might set the stage at the start of the encounter, freezing the action as the scene starts.

Depending on the particular NPC or solution, you might deliver a roaring, angry threat, or a stuttering and feeble plea. You might put your hands on your hips as a challenge, or hold or wave your arms in agreement or surrender. You might bulge out your eyes in shock or disgust.

In the case of your tabletop RPG, you narrate this way, except you provide an active audience with a greater context (clues) surrounding the scene. That active audience is your PC party, and now they’re armed with more creative solutions to the immediate conflict based on your clues.

To prepare for the best encounter-start delivery you can give as GM, write out, jot down a few highlights, or practice your narrative deliveries before each encounter or session. Bake in strong word choice, voice inflections, body language, and facial expressions.

For example, jot down cues for you do make some sort of gesture. Summarize or use quotations (“lines” like an actor would say or narrator would read). Focus the details of your delivery on what the NPCs want and fear, relevant emotions, and clues to a non-combat resolution.

The Solution to Banditry

Bringing everything we’ve learned together, let’s finish setting up the encounter of our favorite starving bandits. Take special note of the “Narrative Delivery” section:

Take the Solution to Banditry and rewrite at least two of the four elements (motivation, weakness, non-combat solution and narrative delivery). Refer to the various steps of this lesson as you go.

When you’re finished, take a moment to reflect on a) what you liked about the changes you made, and b) any challenges you faced with your changes.

Want to share your banditry activities with us? Go ahead and hit reply.

You’re now ready to narrate and deliver option-rich encounter narratives! You’ve learned how to identify key NPC traits and non-combat solutions. And you’ve learned and how to vividly deliver this information at the start of your encounters.

Want more ideas like these? You might also like my Leonine Roar articles: Attack With Your Social Skills and Fight or Flight? Run Away! And for a more detailed look at body language, you might also like RPT#513: How to Use Body Language For Better Storytelling.

What tips do you have on how to narrate and deliver option-rich encounter narratives in your games? What do you do to draw your party in and get them thinking about multiple ways to “win” each encounter?

[Comment from Johnn: What happens when a PC fails a roll in a social situation? Here are 50 ideas for you. I spotted this article online and loved it. So I asked John and Sam at RPG Alchemy if I could republish it in Roleplaying Tips for your campaign use, and they kindly agreed. John has a couple more such articles on the site, and you can catch them here, here, and here.]

Interaction with The Law

Interaction with a Group