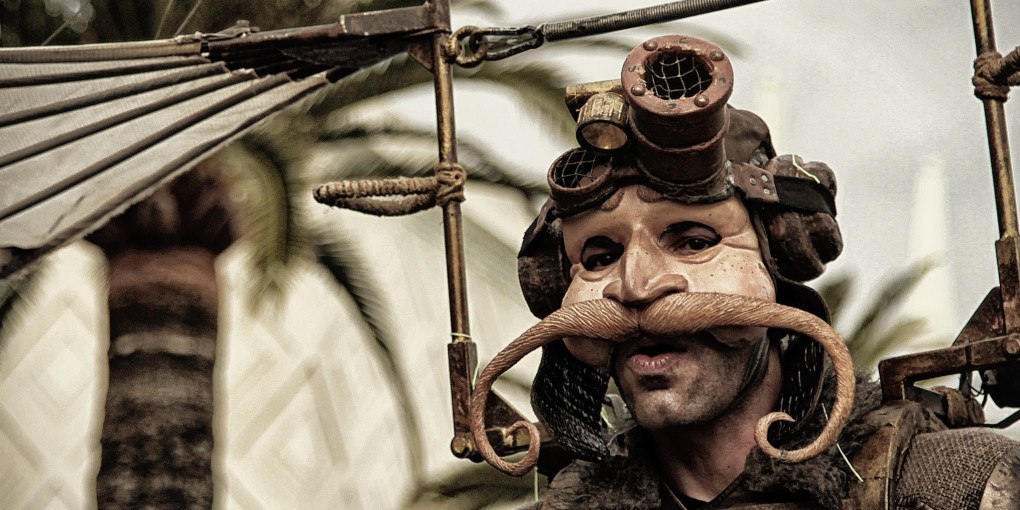 Roleplaying Tips Patrons regularly receive secret articles written by me, and I just wanted to let you know the newest article – Divine Intervention Tips For Low/Med/High Level – has just been released and is available for download in the Patrons area.

In a recent Patron topic poll, divine intervention at different campaign power levels was given lots of votes. So Secret Article #10’s tips are for those of you who would like some tips and ideas on how to handle gods answering mortal pleas.

Exclusive #10 is about 4,500 words big, and the PDF is 17 pages. You can become a Patron today for as little as $2 to get access to the Divine Intervention secret article.

I hope you find these tips helpful. Maybe the gods can play a more subtle and deeper role in your games too.

As you might know, I organize and support the monthly RPG Blog Carnival. And this month I am hosting it as well. The topic for September is curses. Cursed items, spells, monsters, campaign stories.

Here’s the kickoff post with a quick story from my current campaign about a magic sword with just one tiny drawback. Look the comments section to find the great RPG carnival entries submitted so far:

Get some gaming done this week!

World building is a long, arduous process if you’re going to get detailed about it, and no one article could ever hope to summarize every pertinent aspect. Patricia C. Wrede’s famous World Building Questions is 31 pages long, and not only is it just a checklist, it isn’t even the most comprehensive checklist ever (as Wrede points out, the list is tailored to the sort of stories that she writes, and other people might need other questions).

Sometimes, less is more. Just because the well is infinitely-deep doesn’t mean we should keep dipping our cups in it. So here are five world-building suggestions I haven’t seen in the usual lists.

The French, Spanish, and Italians have similarities, given their shared cultural heritage and the cultural exchanges that went on between them over the centuries. Western Europe has many common elements among its cultures, and it’s pretty easy to understand why.

However, something not a lot of people seem to take advantage of is you can get striking similarities between two cultures that never knew of each other. There are strong similarities between the people of the American Southwest and the people of the Afro-Asian deserts, between the horse nomads of the American Great Plains and the horse nomads of the Eurasian Steppe.

Wherever you’re planning to set your culture, consider the environment. Research as many cultures as you can, everyone who lived in that environment, and take notes on what you keep seeing again and again. These are important. When you see convergent evolution, chances are that whatever keeps popping up is important. If you want a realistic culture within the parameters you have set for it, then you have to know what the context demands of them. Look for those patterns and include them in your culture.

Consider How The People View Themselves

Do your people consider themselves to be warriors? Philosophers? Are they honorable, and if so then what kinds of activities do they consider to be honorable? Do they lament any flaws in particular? (It seems to be fashionable for empires throughout history to cry over the corruption they describe in their society but then feel the cure is apparently more empire-building.)

Think about their foundational myths. Every people who consider themselves to be a people will have at least one foundational myth. Everybody has an answer to the question “How did we get here?”, and that answer will let you know what they think of the questions “What kind of people are we?” and “What do we do now that we’re here?”

Consider How The People View Everything Else

Is the land pleasant and something to work with, or is it something that must be forced into submission? Do they live near something akin to the Black Forest of old, a wilderness so large and terrible even the gods were said to fear it? If there are mountains, then do they worship or fear the spirits of these mountains?

Try Your Hand At Remixing Cultures

Maybe you want to practice with a throwaway culture. Maybe you want to get your brain-gears turning and churning and making the butter of glorious inspiration, because right now they’re sticky and jamming every other minute. Take elements of a bunch of different cultures and slam them together. Sumerian cuisine, medieval Japanese drama and literature, and the Zulu governmental system, for an example. You don’t need to grab something for every element of a culture. Just a few.

Don’t just stop at that point, though. This is, so to speak, a world-building prompt. Now you have to figure out how to make them fit. These three things developed in separate contexts. They aren’t going to go together like peanut butter and jelly, but that’s okay. The difficulty will just be part of the fun. As you work, keep expanding and going beyond the elements you initially borrowed (now you’re getting ideas for the class system, now you’re thinking about their myths). Discard stuff, whenever you have to or even just kind of feel like it. The point is not to end up with a culture that has Sumerian cuisine, medieval Japanese drama and literature, and a Zulu government, but to get the process started.

Figure Out The Lived Experience Of This Culture

Get a feeling of your culture from the inside, a person’s-eye view of the thing you have made or are making. Perform this exercise a few times, and not just at the end. Every time you’ve made what you consider to be significant progress on your project, hit the pause button.

Now it’s time to write. Don’t worry, it’s just flash fiction, five hundred to a thousand words. You aren’t writing your book already. What you’re writing might not even be canon in the end. It probably won’t. But write a scene on the battlefield, or an exchange between aging parents and their grown child. Are you coming across problems as you do so? Are there questions being raised, which you don’t have answers to?

Fantastic. Now you know what you’re still missing. Get back there and fill those holes.

R. James Gauvreau mostly just builds worlds, and will often only write a story so he has an excuse to build the world it’s set in. He maintains a blog at whitemarbleblock.blogspot.com, where he regularly posts fiction, story ideas, worlds, and anything else that strikes his fancy. Among his present projects are a world building resource, currently running on Kickstarter, and a revised edition of his introduction to comparative mythology.

He is probably not a spider.

Tips shared by your fellow readers to help your GMing. Have a tip to share? Just hit reply. Thanks!

If you need a quick tool to draft floor plans of that prerequisite tavern for characters to meet, Homestyler is one way to go.

The most significant aspect of Homestyler is pretty much anyone can start using it immediately. It’s accessible and intuitive.

I know there are many other RPG map creators online specifically suited for classic fantasy or sci-fi design, but this is a pretty decent site for creating floor plans. Just drag-and-drop walls and shapes to the work area and alter to suit your needs. The biggest drawback for this program is, since it is meant for modern home design, there are no tiles to work with that could be considered fantasy or sci-fi/high tech. That said, there are still many options for designing a floor plan layout including furniture, floor coverings, walls, and so on.

There are also some landscaping options to place trees, plants, water, grass, though choices are limited. For example, there is only one tree symbol. Areas for terrain can be laid out using basic shape and texture tools, so if you want you can create a lake with a sandy shore surrounded by forest.

The tool provides a smooth zoom feature operable via the scroll wheel on a mouse. Also, every item placed into the work area can be rotated freely to any angle without being anchored to the eight points of a compass or locked to a grid. There are options to use the metric system and to turn the display of all dimension lines on or off.

All plans can be saved or exported to image files, though there is a requirement to sign up for a free account to use those functions. Performing a simple screen capture sidesteps the account requirement, though large maps might require multiple screen captures and assembly in a paint or photo program.

I only recently came across your blog/newsletter/gems/books and holy moly the resources! Perusing got me motivated to start a new campaign (3.5, I’m semi-old fashioned). I’ve already used a lot of the ideas that I’ve found on your site, but I came across this elsewhere and thought I’d send it your way on the remote chance you haven’t seen it.

The DMForge fellow has come up with a pretty cool way to use what you find in a booster pack of Magic: The Gathering cards as an inspiration for your next session.

I will continue to follow your stuff with great interest. You are a godsend to all of us who don’t just want to be good GMs but EPIC GMs.

Because we play with miniatures I love my square grid battle map with a transparent thick plastic sheet on top and my dry-erase markers. At first we used to write directly on the map, but the marks tended to stain it a bit. Writing onto the solid thick transparent plastic sheet I can take it into the shower and wash it thoroughly, we can spill stuff on top and it’s not so bad, etc.

My second favourite tool is some playing cards inserted into TCG sleeves. Write a player or character’s name on the card and this allows for “fluid initiative cards” you can write on using dry-erase markers. When someone delays or readies we put the card up or down and slide it back into its new place when the character has acted with his ready/delay. Wayyyyy better than using a graph pen and paper and re-writing initiative all the time!

This tip came from an old black and white episode of the Lone Ranger. Instead of drawing your standard treasure map, lead your players on an adventure using an orienteering map with a series of clues and puzzles.

Orienteering is a real-life sport wherein competitors use a detailed map to reach a final destination after stopping at a series of control sites along the way. You can find an explanation here.

For your adventure, have each control site contribute something towards reaching the final goal, whether it be information, a key, a mystical seal of approval, or the location of the next control site. To obtain this they must solve a puzzle, decode a clue, or overcome an encounter. Include at least one red herring or trapped control site, add some backstory, sprinkle in some NPCs for your party to compete with, and you’ve got the beginnings of several sessions of adventure.

And here is a list of treasure hunt themes.

The story of Robin Hood is classic inspiration for fantasy gaming. A crucial part of the legend is Sherwood Forest, which provided food and shelter to the Merry Men. This table presents a range of creatures to hunt in such a wood, a distinctive trait to apply, and a twist to keep players on their toes.