The guys on Dungeon Master Block have done a few podcasts of inspiration from Magic the Gathering cards and mention this site as a place for random inspiration:

I have never played MtG, but can see that between the art and descriptions, there could be options for either places, encounters, or an adventure arc.

Especially when packaged with your advice of “build what you like.”

I believe for some GMs the issue is more about having an idea to start from that isn’t just a re-run of something they’ve already done.

Thanks Sol. Let’s try this idea out.

First, start with a specific objective. What do we need an idea for?

Staring at something random with no purpose has a poorer chance of inspiring.

So let’s say I want an encounter idea for Room #2: Puzzle or Roleplaying Challenge.

I click the random Magic the Gathering card link and I get Ghastly Remains: 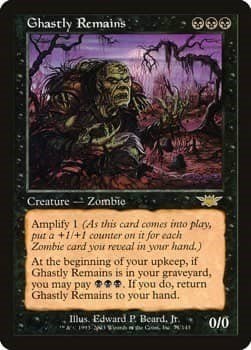 I don’t know how to play Magic the Gathering, but the card gives us several cues to work with.

There’s the title of the card, Ghastly Remains. A creature type of zombie. A cool picture. And a description, paraphrased: “The zombie gets a bonus. If the zombie is in your graveyard, pay something to continue building a horde of zombies.”

We want a puzzle or roleplaying challenge.

Let’s say there’s zombies. What if they can communicate? They might speak.

But…what if they can only draw?

Let’s say the PCs’ objective is to find a certain grave where a clue or treasure is buried.

And the zombies have scratched one ragged symbol into themselves. Of the growing horde of zombies rising from their graves, the creatures keep clawing one of three symbols onto their bodies.

Each symbol is a landmark or clue about where the specific grave is located.

How is this happening?

I love reading all the GM advice out there. I use Instapaper to save various articles for reading. I have a backlog of hundreds to get to, which is awesome. There’s also a growing pile of GM advice books on my bookshelf to read.

I love learning how to be a better game master.

However, all the advice I’m finding lacks the steps or recipe for actually doing GM things. That’s the hole I’ve tried to fill for GMs the last 20 years.

In this case, there’s a point in my example that will leave some RPT GMs scratching their heads, wondering how to duplicate the result.

The Creative Friction in turning a Magic the Gathering card into an encounter came from the leap I made. I went from zombies to zombies who can draw. Where did that idea come from? If I didn’t make that idea, the rest would not have happened. And if you can’t make those ideas happen, then all my advice fails.

In this case, I used the What If? technique. I talked it out by writing.

“What if they can communicate?”

“What if they can draw?”

The “communicate” What If came from the encounter type: roleplay.

And that’s a second technique I used. I added constraints or boundaries to the brainstorm before I started brainstorming.

You can’t create easily with a blank piece of paper.

You need rules, like it’s a game. It is a game, actually, in my mind.

So I started by giving my brainstorm a purpose or desired outcome. I gave it some rules. I need a Room #2. I needed to use the random Magic card selected for me.

These rules helped give my brain direction on where to go with its ideas, relationships, and pattern matching.

Then I applied the What If technique.

And the leap between “communicate” and “draw” came from thinking about types of communication.

When you get the seed of an idea, start thinking about its traits, topology, and taxonomy. Also think about its meaning. What is it? What is it about? What does it mean?

What types of communication are there?

I went with drawing.

So leap #1 came from providing the rules to the game I was playing. Rules for narrowing things down to help get specific ideas.

Leap #2 came from thinking about an idea and what it meant. And that gave me the link between roleplaying => communication => drawing.

The third leap of what the drawings represented came once more from the rules of the “ideas game.” What do the drawings mean? What do they do for the PCs? And the rule I picked was from the encounter type I wanted to build: roleplay or puzzle.

What If…it was roleplay and puzzle.

That begs the question, what kind of puzzle? How could drawings turn into a puzzle?

I used the details I had at hand and saw something interesting in the card description. A graveyard.

Then I asked Why? and What?

Why would the PCs go to a graveyard? What’s the mission objective?

The idea of finding a specific grave came to mind because I thought about the traits, topology, and taxonomy of a graveyard. What’s in a graveyard?

A place you bury someone. Or something.

The Good, The Bad, and The Ugly movie came to mind. It’s a treasure hunt movie. Factions quest for treasure buried in an unmarked grave.

Yoink! I grabbed that idea and went with it.

That’s the final tool I used in this exercise. I drew upon my past experiences. Betty Edwards calls this Filling The Well. Fill your brain with future ideas by reading, having hobbies, going to museums, and so on.

The pieces fell together at that point. The PCs needed to find a specific grave. The zombies provided visual clues. And the logic or believability factor came from putting the creator of the puzzle in the grave along with the quest object.

You Can Become Creative!

To summarize all this, there is a process to creativity. It requires work. The work involves acquiring mental tools and then using them and practicing.

The mental tools I used in this particular case were:

If you draw a Magic the Gathering card and have no idea what to do with it, don’t give up and think you’re uncreative or suck as a GM.

All you need are some mental tools in your GM Toolbox and practice.

Sol’s tip for us today is a great way to practice.

Let me know if you have any questions about this. Hopefully I’ve dug deeper into the How of doing this so you can see the exact steps to reproduce this for your games.