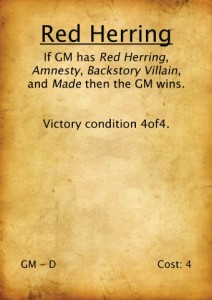 In RPT#512, Robert Corrina offered us a tip about using a special heists deck. to add more fun to heist adventures. The idea was to offer additional inspiration for story twists and turns in your game using a deck of cards.

Well, Robert now offers us his deck of cards you can use for any game system or genre, downloadable for free care of GoDeckYourself.com.

First, download the heist deck cards so you have them in front of you as we explain the rules.

Update 2021: Unfortunately, the site that generated the cards is no longer in service. I’ve got a Doc backup of all the card descriptions for you to reference. Get the Heists Deck Explained doc here.

Each card contains a description of its effects.

There are two types of cards: GM cards and Player cards.

The hyphen D (— D) in the lower corner on some cards means the card stays in play for the rest of the heist once laid down.

A D+ in the lower corner means the effect not only lasts for the entire heist, but also becomes part of the game once the heist is over.

The Cost is explained below, but the cost value shown on a card is basically how much you must pay to play that card on your turn.

(Victory condition x of x) If the GM can play all four cards before the players win the heist, the players fail.

The setting of the heist is very important. Traditionally, the heist takes in an urban area. The setting and map you use should include the following locations so certain deck cards make sense and are usable:

There are three categories Treasure, Technology and Evidence.

The GM picks the starting target but should be prepared for the players to change the category.

The cards are designed to play simultaneously with your RPG – in-game.

The GM or player may only play a card or cards on their turn.

To play a card one must discard a card of equal value. For example: discard a Cost: 3 card to play three Cost: 1 one cards.

The GM has a hand size of seven cards and draws one card at start of his turn.

Players each have a hand size of three and draw up to their hand limit at the start of their turn.

Draw and play cards according to whose turn it is. Game out the results.

For example, if you play Contacts, roleplay acquiring and using the contacts.

Winning requires the players to play out the heist, taking into account all cards they play. Cards should be roleplayed and handled through in-game terms and the mechanics of your game system.

The GM “wins” if he can play all four cards before the players win the heist, the players fail.

The PDF is free

You are free to print out the PDF, send it to friends, or do whatever you like with it. Robert has chosen not to add any copyrights to the deck. Thanks Robert! Great job on the Heists Deck.