These features make it easier to stay on top of your campaign details and make your detailed notes easier to find and read, whether it’s during the heat of a session or those creative days leading up to it.

I think the best feature, though not earth shaking, is the ability to make Log Entry text bold, italicized, underlined and more.

I’ve been waiting for this feature so I can make my stat blocks far easier to organize, skim, and understand with a quick glance at my tablet. Awesome.

If you have Campaign Logger open, paste this into a Log Entry to take the formatting for a spin:

This format is important to remember as we’ll be using this pattern in future features as well. {Command|text}.

The u = underlined. The b = bold. ub = underlined bold. That’s how you combined multiple formatting commands.

Quick Tip: Tag this entry as a Rule so you can find it again in the future if you forget how the formatting works.

You can now title your links instead of displaying the raw URL in your Log Entries. This will help make things nice and tidy in your campaign notes.

Here’s text you can paste into Campaign logger to try it out:

There’s now a second kind of 3 Line NPC instant generator for you. This one takes the first person point of view to help guide you into character and roleplay NPCs better.

You can regenerate any line until happy. One button click automatically adds the NPC to your campaign. And you can edit the NPC anytime as you see fit.

PCs go off the map? Build a village instantly. Each village has three randomly generated lines:

Each line can be regenerated as many times as you like until you get designs you want to keep. One click to add the village to your Campaign Log. Edit the village anytime.

Bigger boxes: Log entry edit fields will automatically expand on your browser screen to a limited degree to allow better editing of long texts. Before the text box would not get bigger as you made longer entries. Now it does. This works in most modern browsers.

Random Tag widget: under the Generators widget you will find a randomly selected tag out of the tags you have used in the current Campaign Log you are using. This tag gets auto-updated every few second. Use it to surface random details of your games as reminders, inspiration, and idea combos.

Fixed a bug where the last item in a list of tags was not getting linked.

Improved speed of the entire Web App by moving to Micro Services.

Fixed a bug where new Log Entries would not show up after Campaign Log import until screen was refreshed.

If you get stuck coming up with a combat description during the game, use the nifty Combat Descriptions cheat sheet for instant roleplay. It has five different randomly selected offerings to help you GM fights better and deepen the mood: 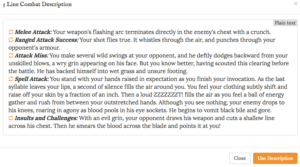 I love the new generators and the cheat sheet. And, as mentioned, the text markup is huge for my logging, and I hope it helps you just as much. We’re working on the next set of features and have more releases planned to continue making Campaign Logger your essential game information management and inspiration tool.

Click here to learn more about the Campaign Logger software for game masters.