Here’s a tip from a reader that’s been sitting on my hard drive for awhile. Now that I have this shiny blog I can finally post it! 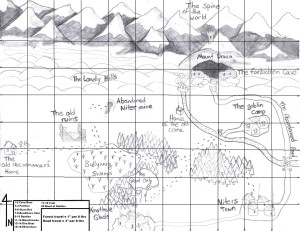 Here are some examples of my index cards. I write them in Word then print them out onto cards. I would use computers, but my group is mobile, so I don’t ever know if I will have wi-fi access. That’s the primary reason I don’t use a computer entirely for game management.

The blue text I read aloud. The bullets give details about the location, NPCs, and Items, Stats, and DCs. The small thumbnails at the bottom remind me to show my players a picture. The card backs have stat blocks for important NPCs. All I have to do during the game is flip the card over. I also included an example of my typical regional map (this one I have been using in a new D&D story I recently started playing, but the idea is the same as my city-wide map).

In this example the PCs will have reached a point in the story where they are looking for a dance club called “Mystique Exotica.” You can see how the clues noted link the different cards together. Some of my notes are just assumptions of what I think the PCs will do. I am all ears for advice on making this system better.