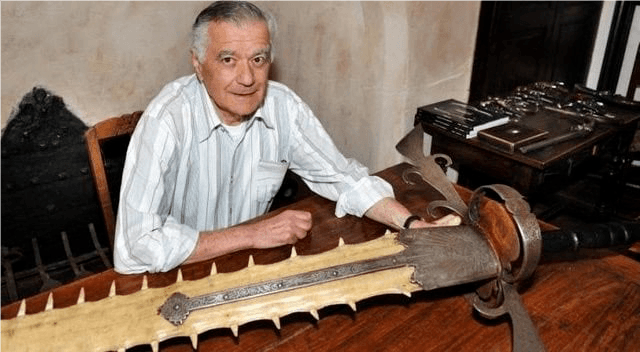 A bit of inspiration for you, if you have five minutes.

Above is an image of a sword made from a fish beak.

Spend five minutes today and figure out how to include this in your campaign.

Most of our game ideas involve four of the six Campaign Buckets:

Run through these buckets in your imagination and see what ideas pour forth.

Quickly log all ideas that come to you as you read this Musing.

I’d start with Campaign Bucket #1. Who made this sword?

Think bigger and ask, what culture makes swords like this?128

Then use the 3 Line Culture tool (Beliefs, Aims, Rituals) to quickly build that culture out into something playable.

With such a strong visual, you could make fish bone crafting part of a culture’s identity sure to stick in players’ minds.

Beliefs: The Flamen are governed by their priests and believe all people are created equal.

Aims: The Flamen sail forth in their ketches and make war on oppressors. Sometimes this causes chaos in regions where order dissolves in the Flamen’s wake.

Rituals: The sea is divine. Sea water is holy water and all its creatures are blessed. Hunters honour the great velryba by liberating their bones to craft weapons and armour for use in their crusades.

Adding to our ideas pile, explore the where of this sword.

My first thought is a five room dungeon.

But perhaps also a secret market. A museum. An armoury.

What if a sawfish sword was a new museum exhibit and offended Flamen quest to get it back plus exact a little retribution?

We’ve got a fancy sword. But if we think bigger, maybe we muse on what other finely crafted things could be made from sea monsters?

I always like the idea off off-menu equipment lists you open up mid-game as rewards or hooks for players. Perhaps goods taken from Flamen are treasured for their strength, light weight, and durability?

How can we turn the sword into a quest or five room dungeon?

By working through People, Places, and Things first, we start getting synergy with our random ideas.

The PCs recover a Flamen sawfish sword and show it off back home. Word reaches a Flamen priest who declares a holy quest to recover the blade and put the PCs at the bottom of the ocean for their blasphemy.

Spend five minutes today and see how you might incorporate a sawfish blade in your campaign.