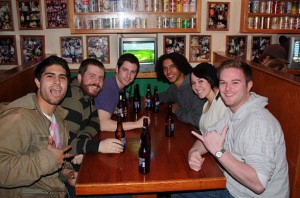 What kind of GM does a quantum physicist and a French existentialist artist produce? Let’s find out. Meet Alexander D. Fagaly, aka Hourglass.

Do you have a blog, website or campaign wiki?

My website consists of my gaming group and a few other friends. We post various alternative rules, campaign concepts and generally funny quips n’ pics

Oh jeeze, well in the fourth grade I met my best friend Matt. We began an immediate good friendship over the awesome game, “Heroes of Might and Magic 2.” He would always play a Paladin (the unit), I would play a Titan (unit) or the Warlock army. Not much of a surprise I’d become the GM. Beginning in the 4th grade we haven’t stopped yet, so around 15 years, tops.

I enjoy the fantasy and medieval settings the most. I find that in fantasy you can have the widest range of campaigns, introducing a very low-magic medieval setting (A Song of Ice and Fire) or a campaign that involves conquering nations and defeating gods (Faerun).

Plus, medieval settings are brutal, unforgiving, and cruel. Mostly, I enjoy any setting where the players have an entertaining sense of freedom, purpose, and heroism within the campaign.

Matt and I needed to play D&D. I was more creative and a bit of a control freak; he was just happy to fantasize within an imaginary world. I got into GMing because of a sense of disillusionment with the real world. My father is a quantum physicist and my mother is a French existentialist artist, so much of the mystery of the world was instructed to me quite bluntly at a young age. It certainly developed me into a sceptical, intelligent young man with a craving for fantastic adventure.

Invariably, it has helped me act with tact in a political sense (within a fraternal meeting for instance). GMing has given me the ability to remove my bias from a situation and critically analyze the circumstance at hand.

Most of all, it has given me a sense of purpose in terms of leadership. I constantly find myself being able to come up with legitimate solutions quickly. Sometimes they prove successful, and other times they aren’t the most effective methods, but at least I can get the ball rolling.

My group tries to play twice a week (fairly successfully) in the late evenings. Our sessions can run anywhere from 4 to 11 hours depending on how much adventuring / caffeine is within reach.

Where do you play?

Our usual environment is in a good friend’s library; the setting is quite fitting. We sit about a simple table surrounded by literature (excellent sources for tavern names, NPCS, and inspiration). Our gaming environment is fairly mundane, so we tend to focus on becoming involved into the setting and situations in-game

Both. I have been in love with the Dragonlance universe my entire life. I have read every book, so as a result, I enjoy running that campaign. However, I change certain little events within the world. I don’t change any of the large history–that is anathema to my sensibilities, but I enjoy staying true to a setting’s feeling and spirit.

I run personally created material when I am interested in exposing the players to a new method of running a game I may have created.

I think I do both published and my own because I can learn more that way. If I only ran my own personal material, I would be closing so many doors where much more experienced writers are offering free ideas, traps, story arcs etc.

Never be close-minded when it comes to running a session. You have the opportunity to forge a universe. Do so with gusto!

What non-digital and electronic GM aides do you use?

I use hand-created maps occasionally, pictures I draw (of magic or profane weapons, for example), but aside from that not much. The game was meant to be an explorative journey into the collective imaginations of a group of close friends. Don’t rely on unnecessary tools, as cool as they may seem.

Preparation. I can run a session from literally scrap, and create an entertaining session straight from my mind. I need to be diligent about writing material. I once wrote a few sessions out in minute detail and my group remembers each session with as much excitement as when the sessions played out….I need to write more.

When was the last time you were a player? What insight about GMing did you pick up?
Uh, probably a few weeks ago. I am usually a jerk when I play. I tend to pick up negative or unfair tendencies GMs exhibit when they run games.

A lot of GMs (in my group it seems) have a convoluted sense of fairness. They cannot seem to handle their campaign not playing out in the EXACT fashion they portrayed.

For example, a 3rd lvl ranger, 4th lvl fighter, 2nd lvl mage, and 5th lvl rogue were all cold camping roughly 40 miles from the main king’s road in the forest. We were captured by goblins with no chance for escape, no roles, no chances whatsoever… that was a prime example of a DM using Deus Ex Machina just to get his campaign just right (well in his mind at least).

A perfect setting should mimic a college level academic paper, an introductory moment filled with excitement, and gets the players involved and interested, followed up by a circumstance that leaves the players wanting more.

As the story progresses, the players find more information about the overarching situation, and support their position with discovered evidence (via intrigue or notes/monologues) left by the enemy.

Only to culminate into a conflict, either political or martial, that will end leaving the players demanding more from the next session.

A good campaign isn’t about running a few sessions, killing the bad guy and celebrating their prowess. A good campaign should be the slow build-up from the mundane group of adventurers becoming critical to world-shaking events, only to find themselves succeed and make great change in the world, or fail and watch the world slide down to darkness.

Someone willing to play more than one class or archetype. Copycat play styles kill my attitude.

An individual who wants to play, and is willing to become emotionally involved in the campaign.

Finally, someone who is willing to be loud at the table. Meek players keep the game stagnant.

Smash door, interrogate, murder the victim. Kick in the door, quick action without thinking. I’m running a new campaign where this type of attitude will be the death of them. I am excited to watch how the handle it.

I try to breathe as much life into the setting and NPCs as possible. I love leaving open-ended solutions and quest hooks for the players.

I consistently try to remind myself that it is not my world or my game. I am merely the judge making sure everything within the world works in a fair manner.

I can freeflow any session. Give me one word and I can run a six hour session on that. If you want to improve your ability to improv sessions, I recommend you read a lot of literature and pull from the various sources you already know.

Name your NPCS after your friends, copy villains from history and most of all (if you are improvising) actively work against them in a fair but cruel manner.

Three to four hours of writing about the session, leaving a few hooks for future adventures. Most of my campaigns are so freeform the players often decide what will happen next, and based on the NPCs I have written, I will have the act accordingly against the players (if the NPCs are aware of their actions).

I do not use the internet for inspiration. I use my mind, my library, and my fears.

A large tablet computer that would easily draw up maps so I could run large scale battle settings easier. Likewise, a decent mass-battle system in D&D 3.5.

How to get the players legitimately attached to their PCs.

I feel after so many sessions, some players become jaded with monsters. Their out of game knowledge influences (subtly) how they act in game.

Especially with my power gamer. If I throw ONE standard monster at him, he knows every weakness and its CR, etc. He acts according to his metagame knowledge, not with his character’s knowledge. I’d like to learn how to erase his memory.