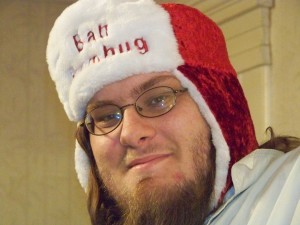 Today we speak with Jared, a GM with a unique style of game mastering, who prefers to be as surprised as his players by what happens next.

My name is Jared Mihalich, though I go by Pieh in my online circles, and I’ve been GMing since around the Summer of 2000.

I typically game at someone’s personal home, my own or others’, but recently have been playing in chat rooms (specifically at www.PenAndPaperGames.com) quite at bit. My favorite system is currently Pathfinder, mostly because my roots and much of my experience in RPGs comes from D&D 3.0 and later 3.5.

As for style of games, I like magic and the mysteries it holds. My games often revolve around uncovering ancient knowledge, making strange (and sometimes dubious) allies, and receiving and using unique powers from such lore or pacts.

What would you like to improve about your GMing right now?

There are many things I would like to improve, but most of them would change the style my players expect from me. For example, I would like to be a better planner. I wish I could write long and detailed scenarios to run my players through and eventually put to print for other groups to enjoy.

However, that’s just not how my mind words. It’s a chaotic place, in there, and it is creative for sure. The problem is that I’m always working towards catering to my players and tailor-making encounters to suit them.

I often sit down to a session with little more than a vague idea of where we left off and what needs to be done, and I run with it. I purposely don’t detail a large chunk of my campaigns initially because I love to see where our minds can take us.

It’s usually me and a few friends around a dining room table at one of our houses. When playing online, it’s me getting as comfortable as possible in front of my computer and preparing to be there for a few hours.

I would say I got into GMing just by getting into role-playing. When I started playing, I was fascinated by the endless options that a character has, especially compared to video games. Soon, I realized I wanted to create things a character could encounter. Instead of being satisfied with a single character in someone else’s game, I became a whole cast of characters and enjoyed interacting with my players’ characters through them.

Creating my own stuff is a huge part of what I do, but I do purchase published adventures and sourcebooks to sift through for information. I enjoy reading the published material and find it inspirational, but part of what I lack as a GM is being able to implement it. My player’s have always run off in some other direction or taken a surprise turn. They always manage to throw a wrench into pre-packaged material.

I don’t, is the simple answer, but it’s not completely honest. I usually take time aside to come up with a few concepts I want to expand, a few tidbits of cool ideas or some interesting scenarios I would like to incorporate. I eventually dig myself into a bit of a hole where I am forced to sit down and expand something out of game, but I do most of the work at the table.

My players… This one puzzled me for a while on how I should answer. I’ve had so many players in my 10+ years of GMing, and I don’t have a solid group of my own at the moment, so let me talk of two that are especially memorable.

There’s my friend Charlie. He’s a hippie kind of guy who has been playing with me since high school. Being a methodical thinker, he can come across as a bit slow at times, but I know he’s really contemplating every angle of approach for a situation. His playing style is no different, he takes his time in acting, but overall tries to make decisions to better the enjoyment of everyone involved. He is typical of most of my staying players because he works with me and the others trying to make a better story.

Now for the other side, the description of a bad player. There was one I played with in a few online campaigns. He seemed to enjoy playing only when the rules were applied in his favor. Being a fair GM, I gave him a few chances. Sadly, he continuously broke gameplay to argue about rules only he had a problem with. I admit to being something of a Rules Lawyer at times, but this is because I see benefit in a solid set of guidelines. I have been known to alter rules in favorable circumstances, or make up rough estimates of a number I need on the fly, but I think the story as it unfolds, for good or ill, is important to a good game.

When I get a group of players that enjoys playing together, the general mindset is that story is important but the rules need to be followed and should complement the story.

I look for a few different traits in players. Cooperation is necessary. If you can’t work with me to create our grand adventure I don’t want you in my game. Also loyalty, to the players, to me, to the game and their characters. Most of all, I look for someone with similar ideas of fun. If we can get along fine outside of the game, I will most likely try to get them into a game with me.

My style is that of the Mad Scientist. I mix and match seemingly random elements and let the explosion do the talking. I often say that I like to be just as surprised as my players as to what happens next.

If I plan too far ahead and everything goes as planned, I get bored. I want some mystery, too. I like it when the characters have their own motivations that aren’t always known to me, but show up in the game eventually.

My skill is the ability to think on my toes. This helps with a powerful GM tool, which is the illusion of detail. Yes there needs to be a reason for the things that happen, but you don’t necessarily need to know it right away. You can always explain it later, or never, depending on how the story progresses.

I can’t think of any advice I could give. It’s a knack, a skill I’ve always had. I’m random and spontaneous. I think that helps, but it isn’t a skill you can improve without changing yourself.

I don’t have any specific books I consult for ideas, but I enjoy fantasy artwork collections for inspiration. I also find that reading adventures for different systems than the one I plan on running can help.

I am a huge fan of www.Strolen.com and everyone there. It is a great resource for anyone playing any role-playing game, system, setting or genre.

I use Donjon.bin.sh once in a while for randomized effects and maps.

And I use www.penandpapergames.com to host my online chat games and even found some local players using it.

I really wish I could be a better planner. I’ve realized that my style isn’t ideal and can be taxing on my mind, but it is how I taught myself to run games and it’s what I have the most fun doing.