The Logic Death Guide to Players 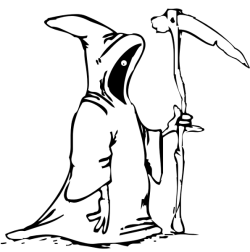 There are two breeds of RPG gamer – Players and Gamemasters. There are several subtypes of the Player breed that, when faced with our glorious hobby, try to ‘break it’ in some way or other. This is not always a conscious decision on the part of the poor player. Below is a short and rather irreverent look at the most typical of the destructive breeds of players commonly encountered by hassled GMs everywhere and, most importantly, some advice as to how to deal with them.

Description: The Everrookie is a clueless bod who can’t grasp the basic rules even after 10 years of playing.

Good points: Can’t rules-lawyer the GM as he has no idea of what the rules are or how they work.

Bad points: Constantly has to be told what to do whenever game mechanics are used. In other words, all the time.

GM’s strategy: To effectively deal with an Everrookie, buddy him up with an experienced player so that the responsibility of looking after him is diminished. This allows you to get on with the business of running the game. Patience is helpful when dealing with Everrookies, so make sure you pick a buddy that has plenty of it.

[Comment from Johnn: another good point about playing with Everrookies is that they often bring fresh perspectives to the game. They aren’t mentally bound by the rules like other player types are, so they’ll often come up with innovative solutions or try things outside the scope of standard game mechanics. Be sure to embrace this creative input! Though it might sometimes be tricky to adjudicate, the flow of new ideas is a boon to most campaigns.]

Description: Every GM’s nightmare. The rules lawyer constantly picks at the GM’s rulings and ignores the GM’s judgement, making sure to protest loudly whenever it contradicts something in print. Probably has memorized every word of every rulebook or supplement in existence, even banned or GM-only resources, and a few more besides. Can’t suspend his disbelief and is probably better suited to tabletop wargaming.

Good points: If the GM can’t remember a rule, this guy probably can.

Bad points: The GM can’t use any artistic licence with the rules in front of him, or the game will degenerate into a rules debate for about an hour. He doesn’t recognize the GMs word as law.

[Two cents from Johnn: Rules Lawyers can be valuable campaign assets, though it varies from lawyer to lawyer. If you have a Rules Lawyer in your campaign, consider these ideas for enabling them to improve your game:

Also, consider increasing the amount of in-character (IC) time spent in your sessions. Perhaps ask that any out of character (OOC) discussion take place away from the game table, even so far as going to 100% IC at the table. This helps curbs Rules Lawyers’ penchant for OOC discussions.]

Quote: “This character is rubbish! I’ve only got three stats on maximum, the rest are only three quarters of that! How do you expect me to play with such a poor character?”

Description: Powergamers are those individuals who just have to have the best of everything in order to enjoy the game. They load their stats full of bonuses and min/max as much as they can, trying to squeeze extra character improvement points and skills out of every stage of the character creation process. They will even try to get extra attacks and bonuses during the game using flawed logic against the GM. Combat rounds mean nothing to these people, and they frequently try to fit twenty actions into a one minute combat round in order to play the advantages.

Good points: Powergamers tend to have a good grasp on the rules associated with combat and their own special abilities.

Bad points: They are constantly trying to get away with things in order to get advantages. Their sometimes criminally flawed logic cannot be reasoned with. What a normal player would consider to be a good character is dismissed as completely unplayable by a Powergamer.

Description: The casual player is the type of player that never immerses himself in the game. He views the game as a boredom reliever, and frequently misses sessions when something else catches his fancy. He’ll frequently do things without thinking because “after all, it’s only a game” and is often a bigger danger to the party than he is to the monsters due to his permanently lackadaisical attitude.

Bad points: He wrecks the tension in carefully planned plots due to the fact that he finds it just a game.

Quote: “I’ll backstab the closest PC with my blade of infinite poison, use my globe of annihilation on the others, grab all the treasure for myself, and escape on my magic carpet!”

Description: Munchkins are greed ridden egomaniacs who play the game to win. They steal all the treasure, min/max like a Powergamer, view the other PCs as rivals, and seek the most powerful artifacts so they can rule EVERYTHING. Munchkins. Enough said.

Good points: When the party faces a powerful foe, the Munchkin usually has enough power, items, or magic to deal with it.

GM’s strategy: Don’t even hesitate – kill the Munchkin’s character in the most airtight, gruesome, and public way possible, rip up his character sheet, and eject him from your game. Munchkins cannot be reasoned with and are not worthy players.

[Comment from Johnn: I feel for Doug’s frustration here. I’ve also gamed with players whose destructive style were campaign breakers. In addition to the option of ejection, consider these ideas:

Quote: “So, I’ve got the orb of soul draining in my hands? I’ll use it on the closest person to see what it does.”

Description: The Apprentice is a chaotic individual whose only goal is to cause as much chaos within the game as possible. He will frequently do mad things “because he can” and “because it’s a laugh”, without a thought for the party, or even for his own safety. This person is as much a danger to himself and his friends as he is to the enemy.

Bad points: It rapidly becomes impossible to run a serious game when the apprentice is involved.

GM’s strategy: Apprentices are truly destructive players. Radical steps are needed to deal with this sort of player.

Quote: GM: “The king says to you…” Hare: “Yeah yeah, what’s he give us? Hurry up, we can clean out another dungeon tonight if we hurry up and buy supplies!”

Description: Hares are those players who are constantly chasing the next goal. These individuals rarely stop for breath as they plunge through adventures, fixated on completing scenarios. When hares meet, they argue about how best to complete missions and start comparing their conquests in a “mine’s better than yours” type mentality. Finishing difficult scenarios is what they live for, roleplaying is just window dressing around mission facts.

Bad points: Hares don’t roleplay, they merely prompt the GM for information. Any role-intensive scenarios will be lost on the hare.

Description: Tortoises are normal players who suffer from chronic slowness of thought. They may be the best roleplayers in the world, but they always slow things down by deliberating over an action for half an hour. When they finally reach a decision, the game has moved on without them.

Good points: When they reach a conclusion it’s usually the right one…

Bad points: …but unfortunately it’s usually a couple of game sessions too late to save the party. It is impossible to get Tortoises to choose a combat action in less than 20 minutes.

Quote: “So, the Duke was a bit furtive when we asked about the village, eh? Well, he must be the one doing the murders. Therefore there must be a passage in this room allowing him to leave and do his dirty deeds… A-HA! I’m right!”

Description: The Sherlock is a master of deductive logic. After a couple of minutes of careful thought, he has usually cracked the mystery wide open.

Bad points: That convoluted plot that you’re so proud of? It will be busted in the blink of an eye if you aren’t careful.

GM’s strategy: Sherlocks make very attentive players, and there are a few things you can do to limit the damage their keen intellect can cause to your lovingly crafted scenarios.

If all else fails and the Sherlock is still picking apart your game, you can do one of two things. Consider reversing the plot line so that everything is actually the opposite of what it seems; but beware – this needs a careful hand to pull off without the players noticing. Alternatively, split the Sherlock away from the main party for a while and send him on a wild goose chase or a sub-plot.

Description: The sheer-luck is a completely air-headed player who stumbles through the game surviving everything that’s thrown at him. He opens secret panels by mistake, finds command words for artifacts by chance, and seems completely immune to death.

Bad points: Finds secrets for the party – without effort!

You can’t stop a sheer-luck, so use him to create the “Scooby-Doo effect”. The Scooby-Doo effect is a scene where the characters will stumble across some clue or secret purely by chance. This clue propels the plot forward, involving the party with a situation that perhaps they would never have gotten into in the first place. Sheer-lucks will find this generates a bit of a friendly ‘love-hate’ thing among the party for their luck ability, and all involved will get a buzz out of the sometimes amazing set of coincidences that leads them into danger. In this way sheer- lucks can be turned from being scenario wreckers into scenario drivers.

Quote: “Away, foul bandits. flee this place or I shall be forced to spill thy blood with thine own blade!

Description: Shakespeareans love the role. They act out EVERYTHING about their character, from the accent to the actions, and even dress up in-character. They take the roleplaying part of the game too far and absolutely abhor any “rules” or “game mechanics” that get in the way of the suspension of disbelief.

Good points: A fine example of how characters should be portrayed within the game.

Bad points: Takes the roleplaying thing too far. Slows simple combat encounters down with needless talk. “A-ha! A jelly of acidic property! I shall slay you now, you oozing fruit of an unholy union!”

Quote: “Look, my ranger is wearing a jerkin just like his model!” or “Hang on, I have my level improvement scores on the back of my player’s screen!”

Description: Geeks. They get everywhere. They throw themselves bodily into the game, acting out the role where appropriate, knowing all the rules, involving themselves in games fully, never missing sessions, etc. The problem is that they go about it all in the way that allows them to lick as many windows as possible. They buy miniatures that resemble their characters, research characters for months before play, purchase player screens, buy all the supplements that have info on their chosen class (and bring them to the game), and download all related documents from the net. The game is everything to the Geek.

Bad points: …but takes every opportunity to display his knowledge on his character and tell everyone how great it is. Constantly says to players “You can’t do that! Your character wouldn’t!”

Description: Logic Death has many forms. Whichever he takes, you can be sure that the game he’s involved in will go to pot somehow. Very quickly. Multiple fatalities and plot failure all take place around him.

Good points: You get a laugh as your game degenerates into chaos.

Bad points: Your game degenerates into chaos, taking your plots and favourite PCs with it.

GM’s strategy: There is no strategy when faced with Logic Death. Logic Death will always find a way…