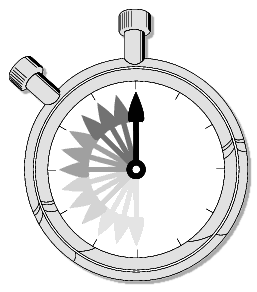 Johnn asked me to write on a topic dear to my own heart. Between career, family, and too many hobbies, I often find I don’t have a lot of time to come up with adventures for my characters. When game time comes, I tend to make it up as I go. The traditional wisdom says for every hour of game time, you need about an hour of prep time. In this article, I hope to pass on some of my techniques to change those hours of prep time to a few minutes.

The number one tool you can use to your advantage in creating an adventure quickly is having some idea of where you are going to end. In many circumstances, you know where you are going to start, either as a function of the last game, or by grabbing whatever appropriate starting point works for you. For me, the best technique I have found is to envision the final, cliffhanging moments of the adventure and work my way backwards to the starting point, always asking the question “how did they get there?”. The answers to this question gives you each previous scene or encounter. String several of these together and you have yourself a basic plot for your adventure.

In a previous article (Roleplaying tips Weekly issue #36) I discussed a plot I threw together in a few minutes – the characters were hired to retrieve a suit of armor. Before I got started with anything, I knew that the last scene I wanted in the adventure was of the characters facing off with a demon. Great, now what? I started working my way backwards to get my basic plot.

Twist It Up A Bit

Now, I have myself four basic points about the Demon adventure. In order to make the adventure interesting and memorable, I need to flesh it out a bit. I begin asking myself questions about the plot. What item are the characters trying to recover? Who is asking them to recover it? This is where you need to focus on breaking the cliches of adventures and twist things up. Doing so allows your material to stay fresh and prevents your players from guessing what you are up to.

In the case of the Demon adventure, I figured out that a minion of the demon hired the characters, and that in order to ‘break the aura of magic and recover the item’, the party would need to place a ‘focusing crystal’ on the suit of armor at the bottom of the dungeon. In reality, the armor was actually the skin of the demon, and by placing the crystal on the armor, the demon could return to its skin and once again awaken.

So, now I have an adventure in which the characters are being duped into helping the demon. Sweet. A great conclusion (if I wanted an ongoing enemy), would be to have the demon escape after he tries to off the characters to prevent their meddling later.

Keying In On Your Players

Players are an inventive lot. They like to figure out your mysteries. They like to think they beat you at your own game. This is a good thing. Use this against them.

Look, I rarely throw a trap, a monster, or even a door at my players without them theorizing about what I am planning. Listen carefully to this discussion. Almost ALWAYS one of the players will say something that’s a really good idea. More often than not, they won’t be listened to. Grab whatever they said and run with it.

This has multiple benefits for you; It lets you share the load of making a good adventure, it lets you hear what the players want to encounter and it has the added benefit of giving a lift to one of the players when they realize they were right. Keep rotating which player is right, and they won’t catch on to you.

Doing this right means delaying acting on the new plot twist the player gave you. Don’t implement instantly – otherwise the players figure out you’re winging it. For example, in the middle of the characters romp through the dungeon, one of them joked that a great moment would be if a trap were a fake.

So, a couple of encounters later that’s exactly what I pinned them with. It took them nearly 30 minutes to “rescue” the character that had stepped on the pressure plate. They were really impressed with their inventive solution to getting the character off the plate without triggering the “trap”. They used a bunch of extra gear to equal the weight of the unfortunate adventurer. In short, I lightened them of equipment (including one adventurer who gave up their armor) to defeat a non-existent threat – a major win for me – all because one player made a momentary joke.

NPCs and encounters are the heart of any adventure. In order to pull off a good “on the fly” adventure, you have to be good at winging personalities and motivations. Use a reaction chart for the basics, but think about characters you come across in books, movies and television. Get good at mimicking different sorts of personalities. When you’re to the point that you can pull an NPC out of the back of your brain at a moments notice, you’re ready to go.

The first encounter the characters ran into in the dungeon was a water elemental in a large pool with a bridge across the water. I dug into my brain when the characters came to this encounter and decided the elemental was a guardian who would attack only if attacked. Of course my characters attacked it first. Sigh. So each character that attacked the creature last was the target of the next attack. Simple, effective motivation. The characters finally ran for the door on the opposite end of the bridge. Fun encounter, simple motivation for the monster and took almost no time to prepare.

The paperwork in an “on the fly” game can be a killer. There is a simple way around it: whatever you do, use the averages. Most RPGs provide basic stats for creatures and encounters. Stick with the most average member of the creature type. Use average attacks, average defenses and average abilities. If you don’t know or can’t determine an average, then use 50% of the top end of the creature type. Similarly, if you don’t know the chances for the creature to do some task or action, use that 50% rule again. This DRAMATICALLY cuts down on what you need to keep track of.

I recently ran a large scale combat between the characters and a bevy of 14 skeletons. All of the skeletons were the same save for one. This made keeping track of what was going on much easier, because I didn’t have to pause to look anything up or evaluate where my creatures were.

Two main issues tend to crop up when running a game in this fashion, continuity and game balance. With continuity, because you are making so much up on the fly, its common that you will make a decision in one game that is different in another game. This break of continuity challenges the players willingness to suspend their disbelief in your games. When you do make a decision, write it down for yourself for later or otherwise record it. This way your adventures stay consistent to you, and your players know the “unwritten rules” of your games.

The second major problem in this style of play is balance. It can be difficult to come up with creatures which are both good challenges and aren’t so powerful that they decimate the characters on the first round of combat. The solution is twofold. First, one we are all familiar with, is to fudge dice rolls. If an encounter isn’t going well (either too much in favor of the characters or of the monsters) fudge your rolls to favor the loosing side. Secondly, it is a LOT easier to lean towards a weaker encounter and power it up as you play than it is to weaken an encounter in the middle. For example, I know I am going to throw a bunch of goblins at my characters. I guess that each character can take on 1.5 goblins and win. I guess wrong. I throw 9 gobs at 6 characters, and mid-way through the fight the characters are getting slaughtered. Why would the goblins leave? They’re winning.

Instead, I will guess low on what the characters can take and amp the encounter upwards if I need to. It makes a lot more sense to me to start the encounter with 6 goblins and add anywhere from 0 to 6 more as reinforcements midway through the battle. This way, I can tailor the encounter to the characters on the fly while remaining balanced to what they can take. These sorts of encounters are challenging, but they are neither automatic wins or suicidal losses.

Similarly, balance your treasures. A good way to do this is to go very weak on the treasure through most of the adventure, then rewarding the characters as a function of the final encounter. This allows you to come up with only one treasure which has to be well-balanced versus many, and generally will allow you greater accuracy on the level of rewards necessary than trying to randomly generate treasure for each encounter.

When you have a well programmed adventure laid out, it’s easy to keep in your mind where things are. You’ve learned the adventure, know the opponents, etc. When you’re playing on the fly it is a LOT more difficult to keep all these things in mind while also keeping the adventure moving forward. Use miniatures. It allows you a place focus as your characters move through your world, and gives you a better overview of what your characters are up to. Using miniatures takes a huge burden off of you as you run a game off the top of your head.

Pulling off a good on the fly adventure requires you have ready access to a lot of resources. As you build your plot, extrapolate what you need as you do your design. In the Demon adventure, I knew I needed a dungeon floorplan, stats for the demon and stats for several undead encounters. While these vary by gamemaster, game and style, here are a few resources to keep in mind:

So how much time did I save in using these techniques to create an adventure? It took me about 45 minutes to come up with the Demon adventure. The adventure lasted about 9 hours. So, it took me 5 minutes per hour of play. Not bad at all.

Good luck with your own endeavors, and happy “on the fly” adventuring.